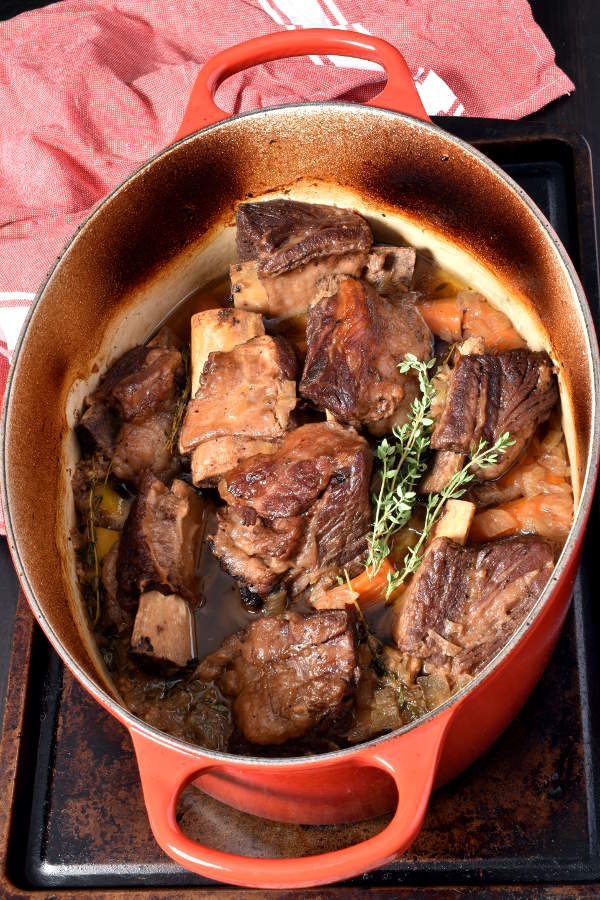 Let’s talk leftovers. If you read about how I came up with the name for my blog, you might be expecting all my recipes to serve two. Today’s recipe, and a few I have coming up, make at least four servings. These are recipes you can make for anyone: your family, yourself, your date, friends, roommates, etc. Even when I lived by myself, I’d often cook meals that made four to six servings.

I don’t have time to cook every night. On the days I work at my job in Boston, I don’t get home from work until late. I like to cook in large batches several times a week to have leftovers for dinners, lunches, or snacks. I will eat anything leftover. Even things that really don’t taste that good leftover, like fried food, I’ll still eat the leftovers.

Now that I’m photographing my food for the blog, it’s always cold before I get to eat. (And I eat everything I make—my photos are the real food.) So if you ever have a question about the best way to reheat leftovers for a certain recipe, I can answer that from personal experience.

Short ribs are not exactly cheap. But when you’re committing to 2 ½ hours oven time, I feel like it’s a crime not to fill up the pot. These short ribs taste just as good reheated as when they first come out of the oven. I think they are even better leftover because if you leave the pot in the fridge overnight, it’s very easy to spoon off the fat from the top once it’s solidified. So if you want a recipe to make for company that you can make in advance, make sure you pin or bookmark this one.

Here are the ingredients: 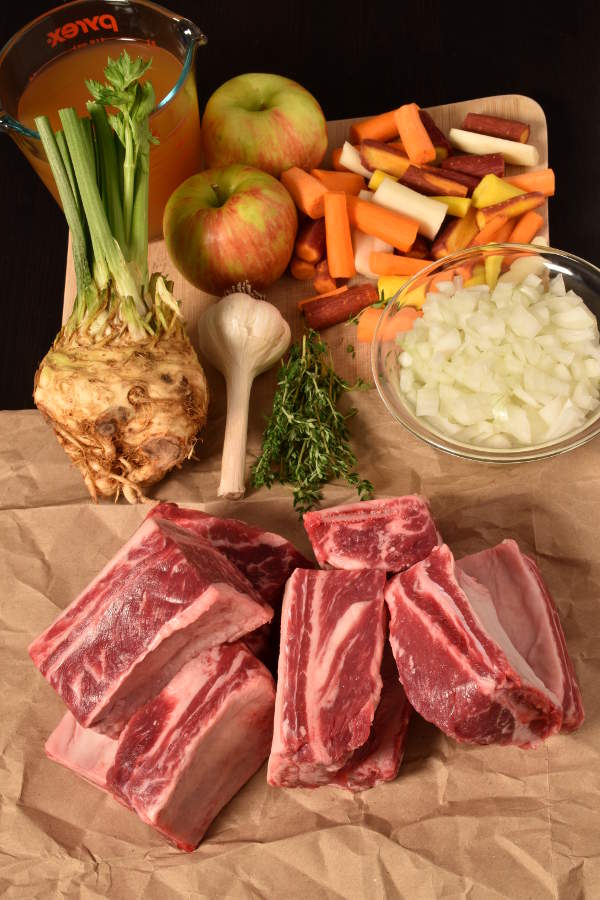 Since we’ve been apple picking, I’ve been cooking with apples and apple cider as much as I can, like when I made an apple cider glaze in this recipe.

Portion size with short ribs is a bit tricky. Some had a lot of meat, and one rib was enough for a meal, while some had significantly less meat. I settled on one pound per serving.

First the ribs get browned. (This is half of them, I browned in two batches.) 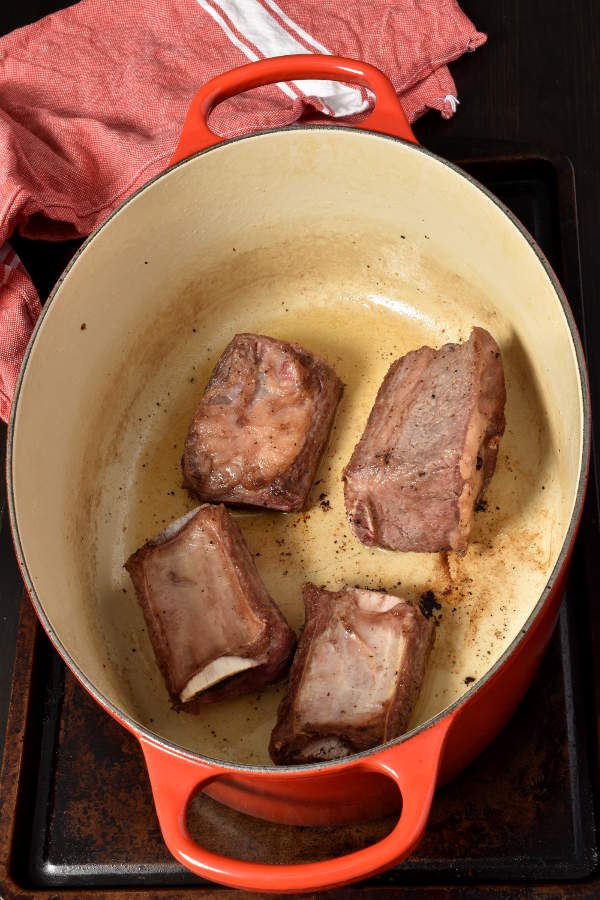 Here’s what the dish looks like before going into the oven: 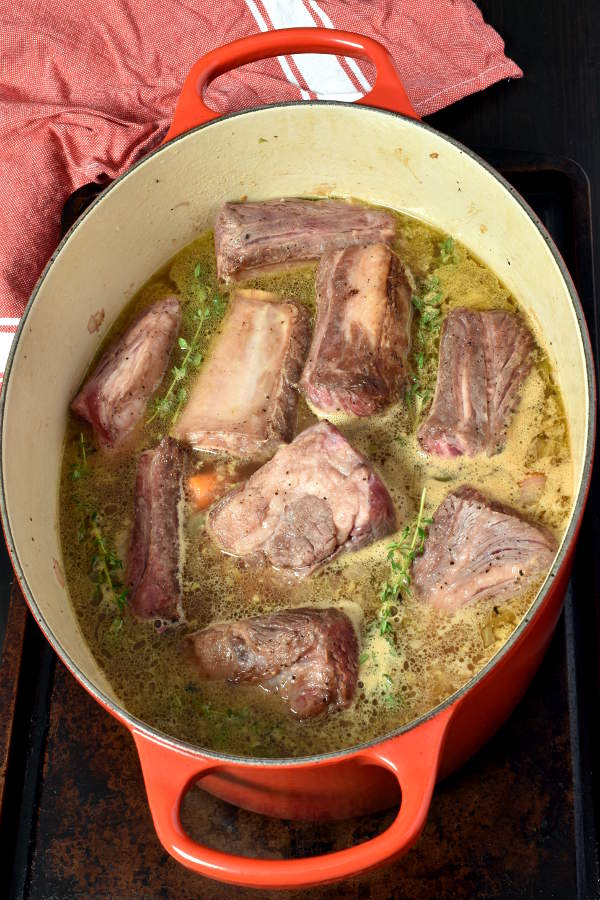 While that was cooking, I made the side dish.

Jonathan’s favorite carb is rice, and I did make some rice to go with the ribs for him. But I don’t want to post a recipe every single week of Something with Rice. I’m sure you know how to make rice anyway. I feel like mashed potatoes are the traditional accompaniment to short ribs, to soak up all the sauce. (If you’re a sweet potato fan, may I suggest the sweet potato mash from this recipe?) Now, nothing wrong with mashed potatoes, but I was looking for something a little different.

That’s when I decided to try a mashed or pureed celery root. If you’re not familiar with celery root, scroll back up to the ingredients photo. That gnarly looking root with some greens on it, resting on the cup of apple cider, is a celery root. This recipe uses five of those.

Celery root is sweet in the way carrots or parsnips are sweet, but it also has a strong celery flavor. I think it goes well with the slight sweetness from the apple cider in the braising liquid. You can eat the leaves attached to the root, but the leaves on the celery roots in my supermarket didn’t look in that great shape, to be honest. I just saved a few to use as garnish. For the root part, you’ll need to use a knife or peeler to cut off the outside, similar to what you’d do for a beet or turnip.

One more thing. If you normally mash your potatoes by hand, you’ll need to whip out your blender or food processor for this recipe. Because celery root is more fibrous than potato, it really works better letting your machine of choice do the work. 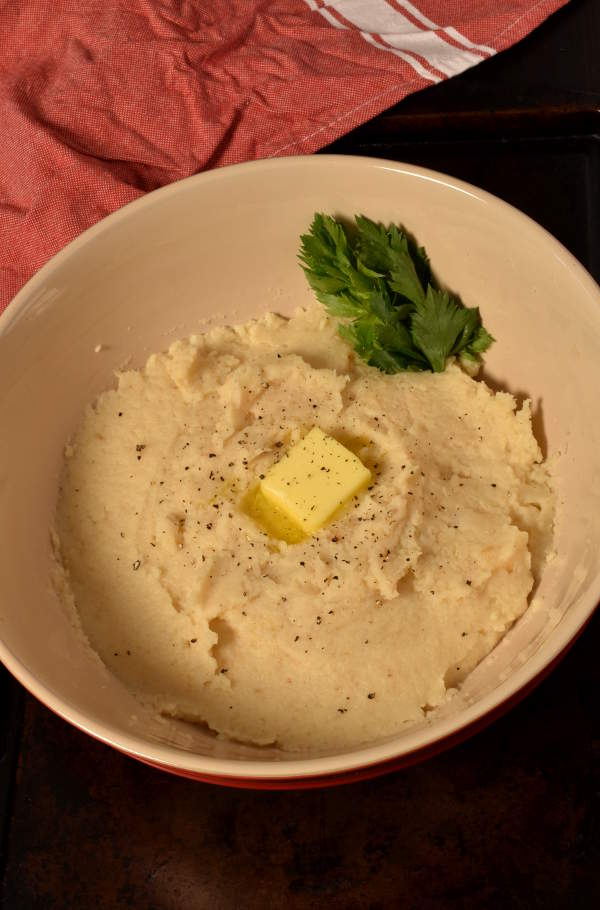 I was so excited when it was time to bring these babies out of the oven. The house smelled so good, it was really making me hungry!

I gave the meat 10 minutes to rest. During that time, I sautéed some apples in butter to serve alongside the ribs. 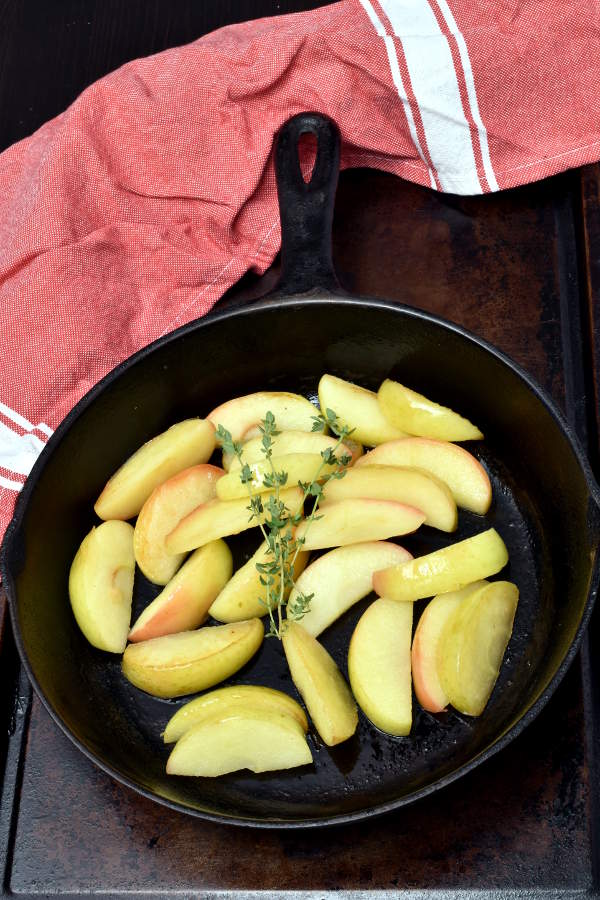 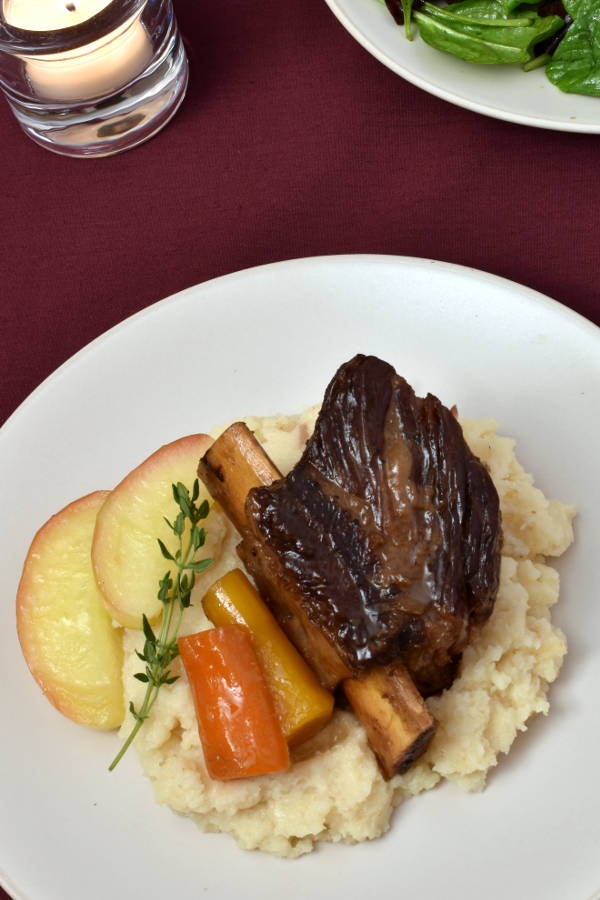 Quick programming note: make sure to check the blog Monday, I’ll be sharing a recipe for a seasonal snack!