Beef bourguignon is a stew made with beef braised in red wine. Originally a peasant food from the Burgundy countryside, this dish became one of the classics of French haute cuisine. 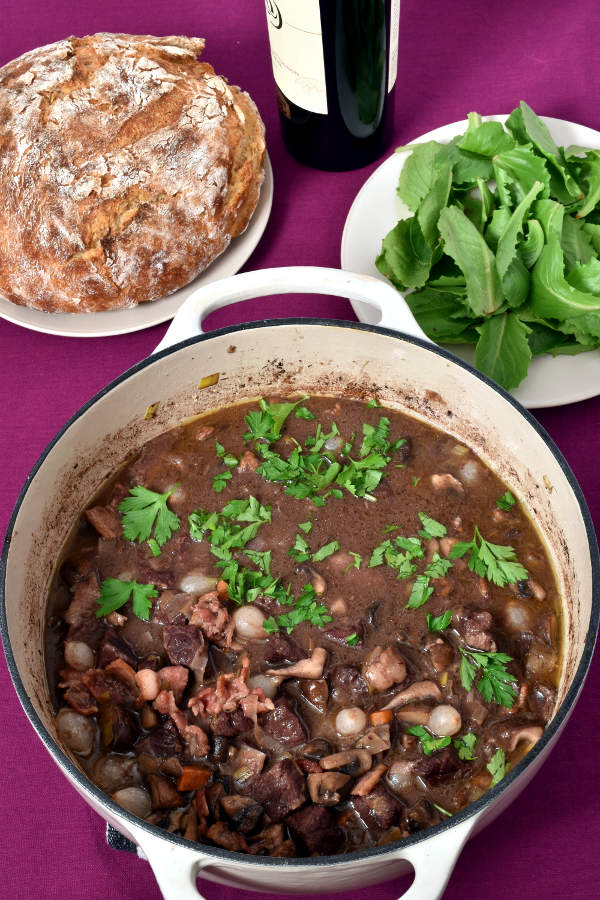 I hope you had a great Thanksgiving.

With the holidays coming up, I’ve been gravitating toward warm cozy recipes that can feed a lot of visitors, without too much work. Today I’m sharing my recipe for beef bourguignon. This recipe makes six generous servings. Ninety-five percent of the work is at the beginning, so you have plenty of time while the stew is simmering to clean up the kitchen and get ready for guests. Or, you know, relax.

A little bit of background before we jump into the recipe. I started studying French in 7th grade and kept at it through my last year of college. At one point, I was proficient, if not quite fluent. Unfortunately I’ve forgotten a lot since then. I am still fine reading books in French, but speaking it is another thing altogether.

When I was in middle school, before the overwhelming load of homework started in high school, I was also in my cooking phase. I don’t remember if we had internet at home yet at that point, but it was definitely before the days of food blogs. Any recipes I made were from cookbooks, my mom’s mostly handwritten recipe cards, or (my poor family!) experiments I made up.

Does it make you guys feel really old when you can remember life before the internet?

This was also before the days of widespread online shopping. My parents wanted to get me a cookbook in French. They found a lot of bookstores that sold cookbooks with recipes for French food, but it took them some sleuthing before they found a bookstore in Quebec that would ship them a cookbook written in French.

Here is the book: 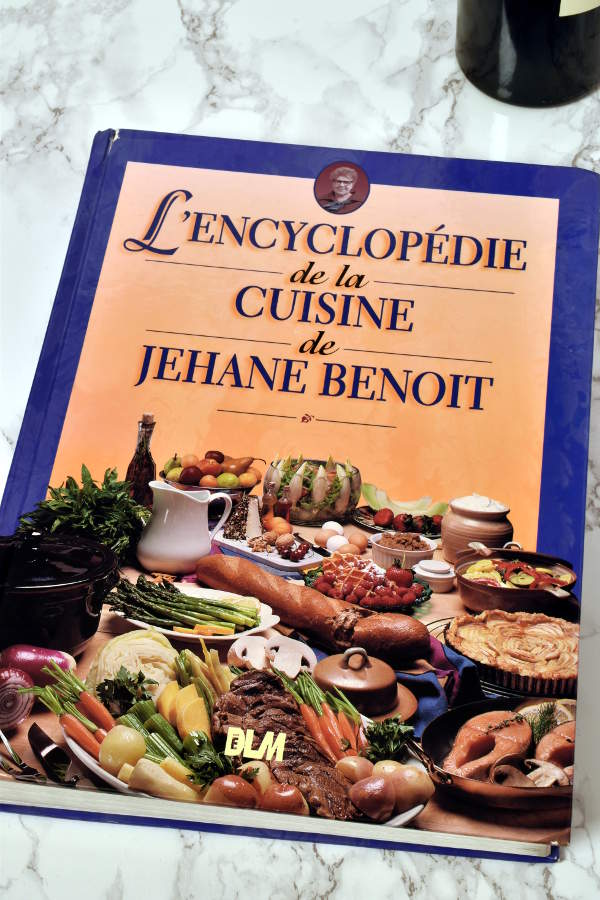 Jehane Benoit was a famous Canadian chef and author. She opened her own cooking school, wrote multiple cookbooks, and was always on  television talking about cooking.

This cookbook is over 700 pages and has recipes for everything like salads, soups, appetizers, game meats, breads, desserts, candy, cocktails, etc., including some international cuisines. I was flipping through the beef section right before writing this post and even found a recipe for Beef Sukiyaki. (Funny because I shared the recipe for my own Beef Sukiyaki a few weeks ago.) It was also really interesting looking at the pictures seeing how food styling and photography has changed so much since this book was published in 1991.

By the way, if this post is putting you in the mood for French food, make sure to check out my more indulgent Duck Breast with Cherry Sauce and Duck Fat Fried Potatoes.

Anyway, the recipe I made the most from this cookbook was Beef Bourguignon. I’ve made my own changes and modifications to the recipe over the years, to arrive at the recipe below.

Here are the main ingredients. That’s a top round roast, some bacon, cremini and shiitake mushrooms, frozen pearl onions, carrots, leek, minced garlic, parsley, thyme, and a bottle of red wine. This recipe uses an entire bottle of wine. If you’re like us and get a lot of wine as gifts but don’t drink that much, here’s a great way to use some. 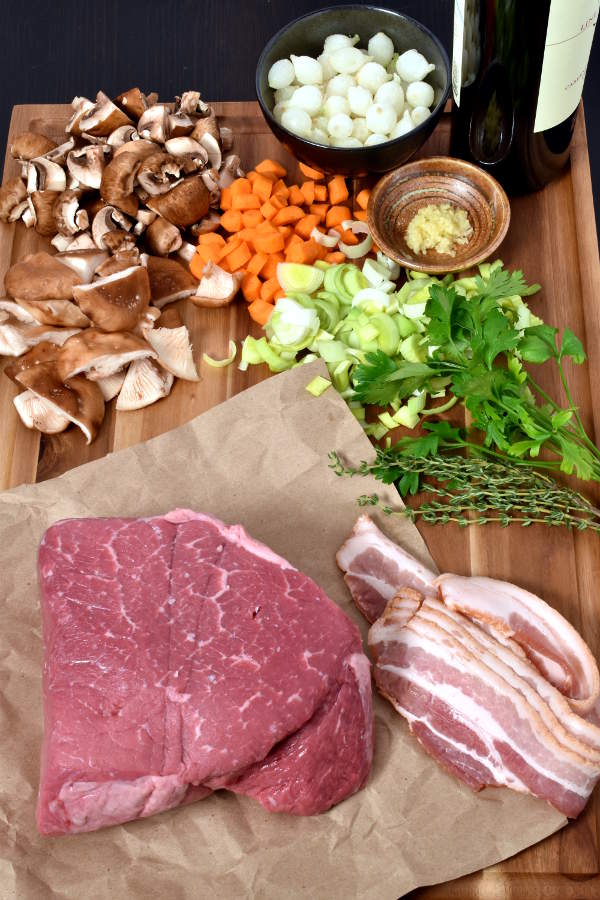 I started out cooking some bacon. 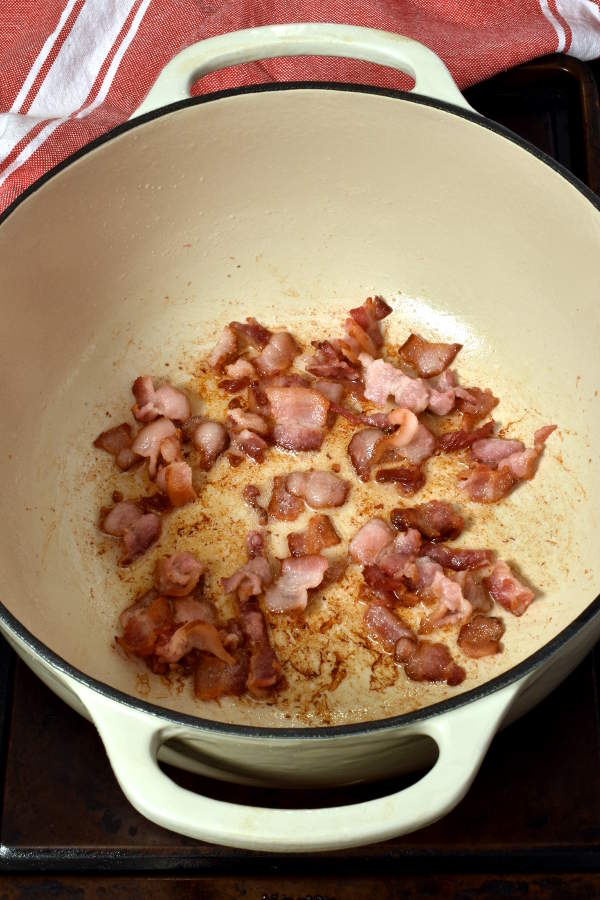 Then browned the beef in bacon fat in two batches. (This is half my meat.) 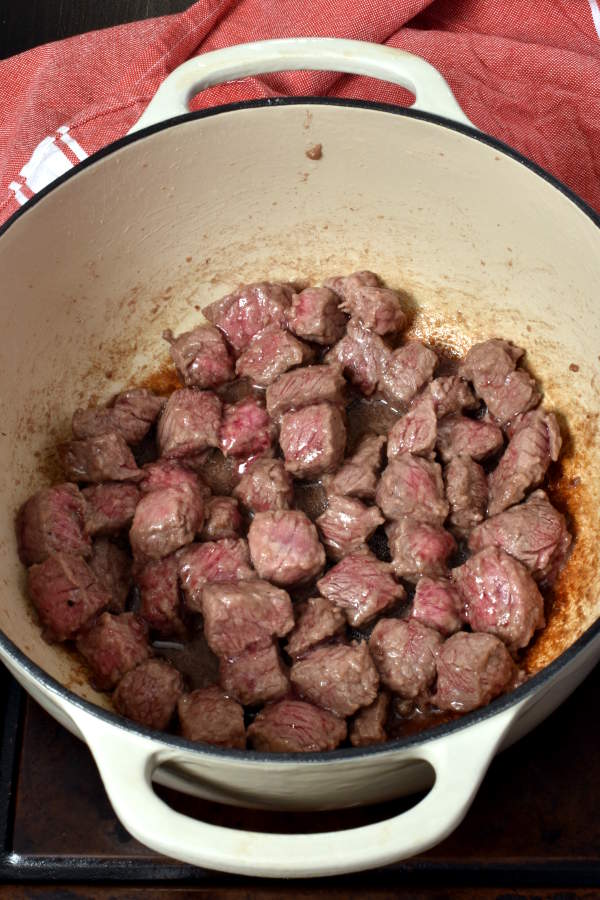 I cooked the veggies and then added everything back to the pot. Here it is before I simmered for two hours. 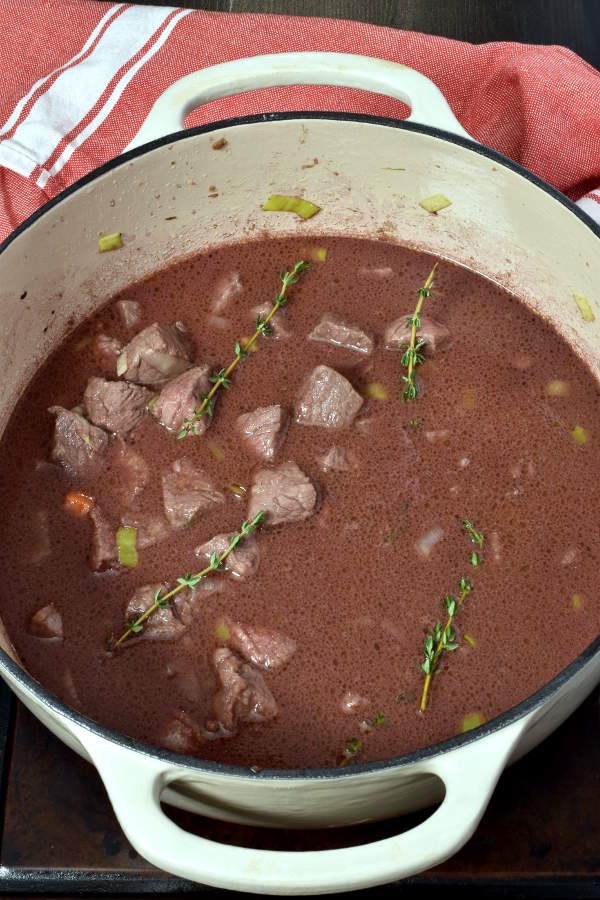 Toward the end of the cook time, I cooked the mushrooms in butter. 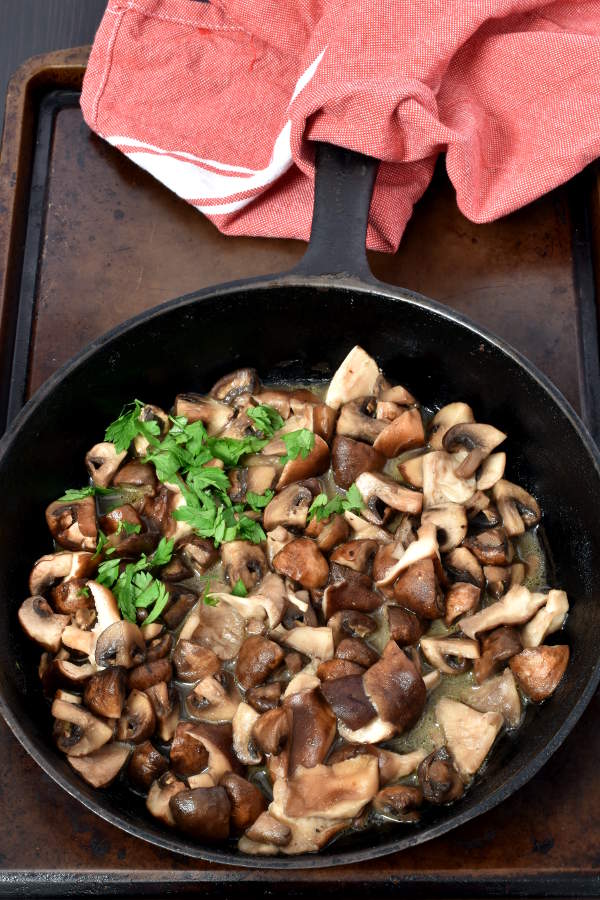 Jehane Benoit recommends serving your beef bourguignon with small boiled potatoes. Instead of potatoes, I like eating this with a good crusty bread to soak up all the sauce, and a salad because I like to get my greens in. I used this recipe from Half Baked Harvest for the bread.

I love how this stew is warming and hearty, but doesn’t sit heavy in your tummy because it uses a leaner cut of meat. It gets plenty of flavor from searing the beef in bacon fat, but it doesn’t taste overly rich. The long cook time makes it more of a weekend project than a weeknight meal, but it’s also great leftover. Coming home from work on a chilly night to heat up a bowl of this beef bourguignon for dinner… nothing better. 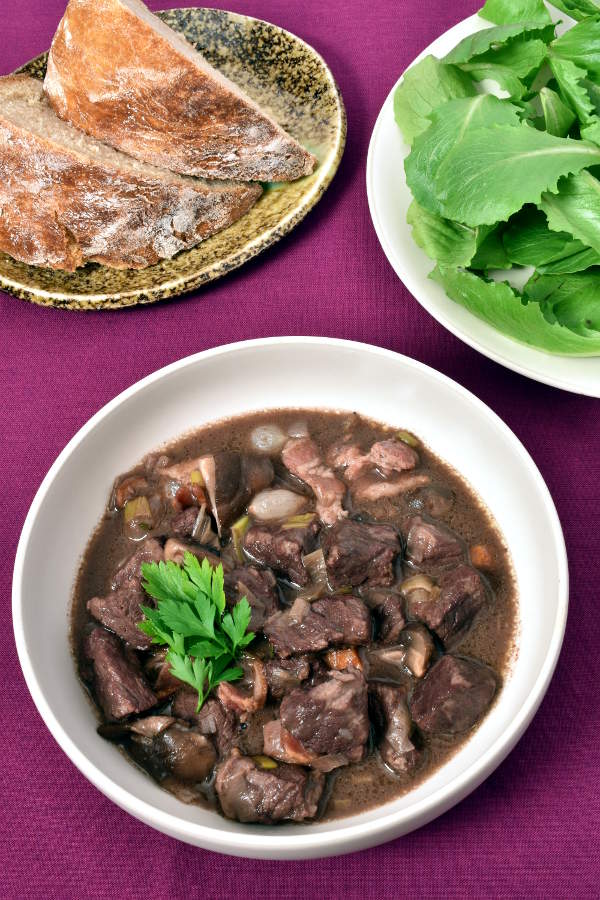