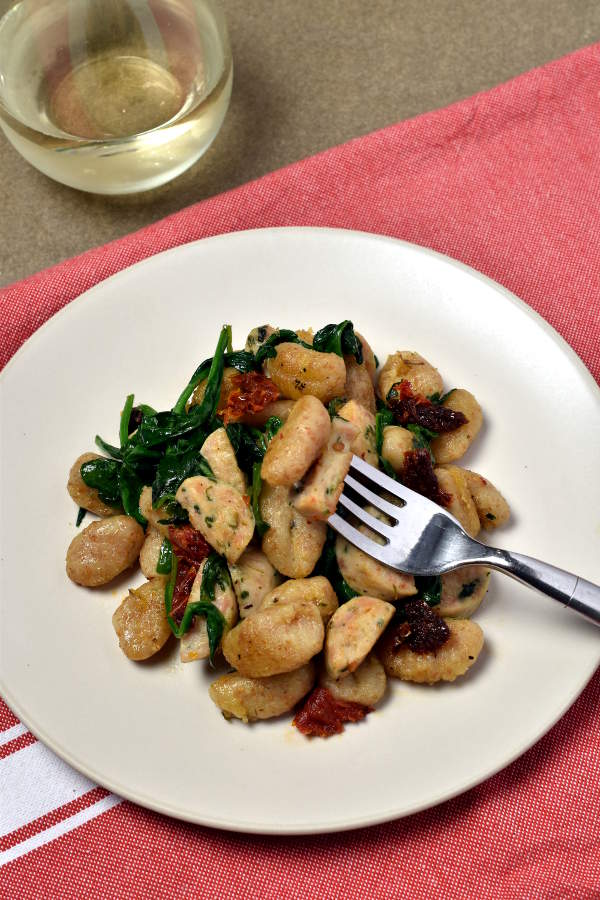 With the hot and humid weather starting around this time of year, I definitely lose some of my motivation to cook. Who wants to be spending a lot of time in the kitchen, forcing an old AC unit to battle against your stove?

I’ve been full-on wedding planning, and starting this week, I’m working more hours at my job. Jonathan is helping me out cooking dinner more often. (He’s also been helpful with wedding stuff. Jonathan is crazy good at putting in envelope liners.) When it’s my turn to cook, I definitely gravitate toward quick and easy dinner recipes. My Linguine with Clam Sauce recipe, Bacon Mushroom Kale Fried Rice recipe, and Salmon BLTs with Herb Sauce recipe all take 30 minutes. Today’s recipe, which requires almost zero ingredient prep, is ready in only 25 minutes.

Pan-fried gnocchi is not a new thing. If you follow food blogs or look for recipes on Pinterest, I’m sure you’ve seen other recipes prepare gnocchi this way. If not, let me tell you about it. You don’t need to boil the gnocchi first. When you pan fry gnocchi in olive oil, the gnocchi gets fully cooked inside, so it’s softy and pillowy inside, but the outside gets golden brown and crispy. After I tried it the first time, I can’t imagine cooking gnocchi any other way.

I like to add some sausage for protein and some greens so I don’t have to cook a separate vegetable. Sun-dried tomatoes add some extra color and flavor.

Here are all four ingredients. The only ingredient not pictured is olive oil. I used whole wheat gnocchi, baby spinach, store-brand chicken sausage that was spinach and feta flavor, and oil-packed sun-dried tomatoes. 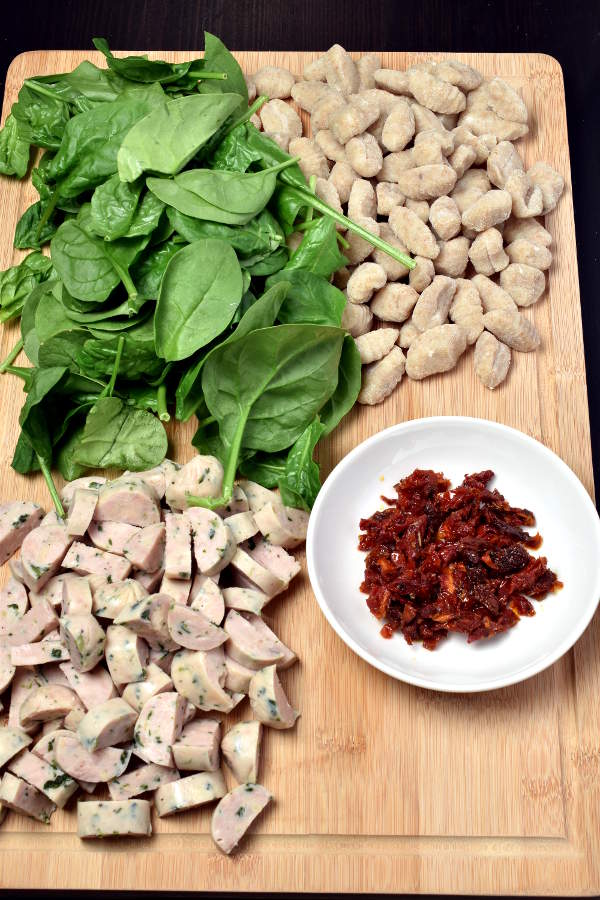 I cooked the sausage first. 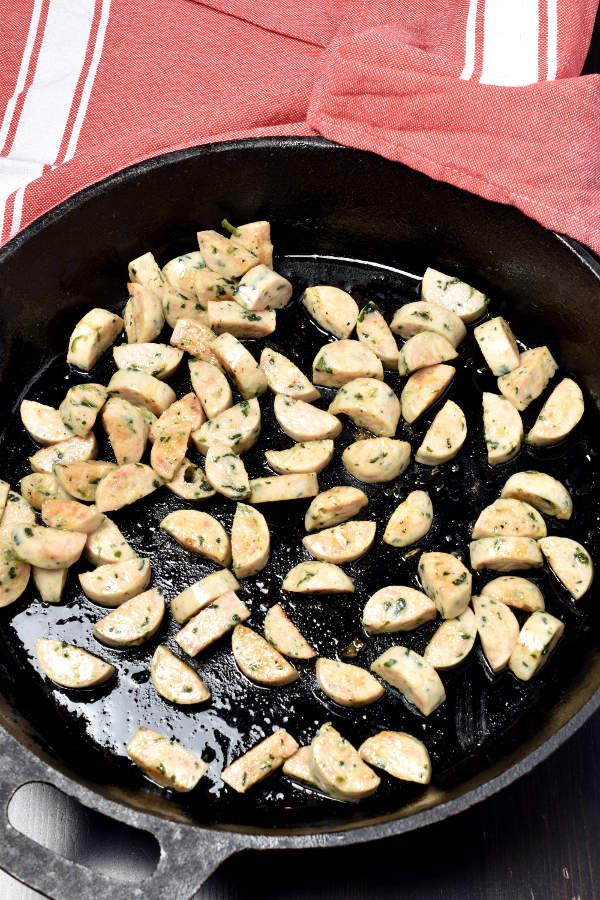 There aren’t many in-progress photos because this dish is so quick and simple to make. But after I cooked the sausage, I removed it from the skillet. Then I cooked the gnocchi. I added the spinach and once it wilted, I added back the sausage. The sun-dried tomatoes go in last. 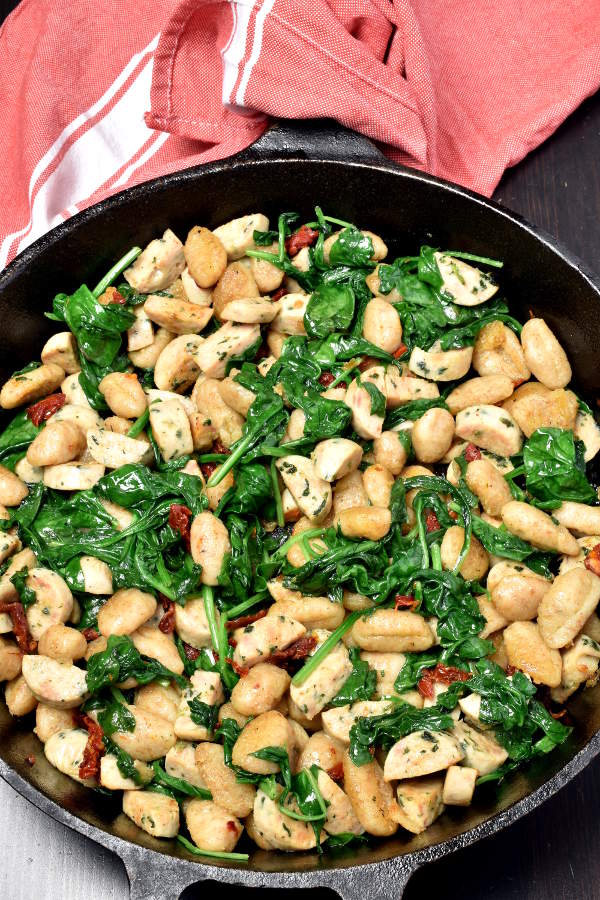 The seasoning in the sausage and the sun-dried tomatoes give it so much flavor, I find you don’t need to worry about adding garlic or herbs or salt and pepper. It’s delicious as is. 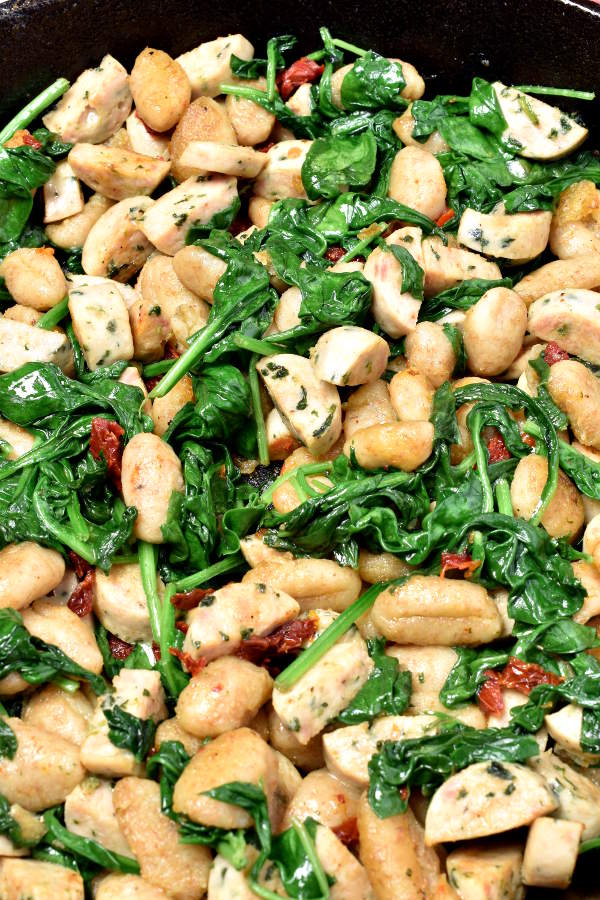 Perfect with a glass of white wine. 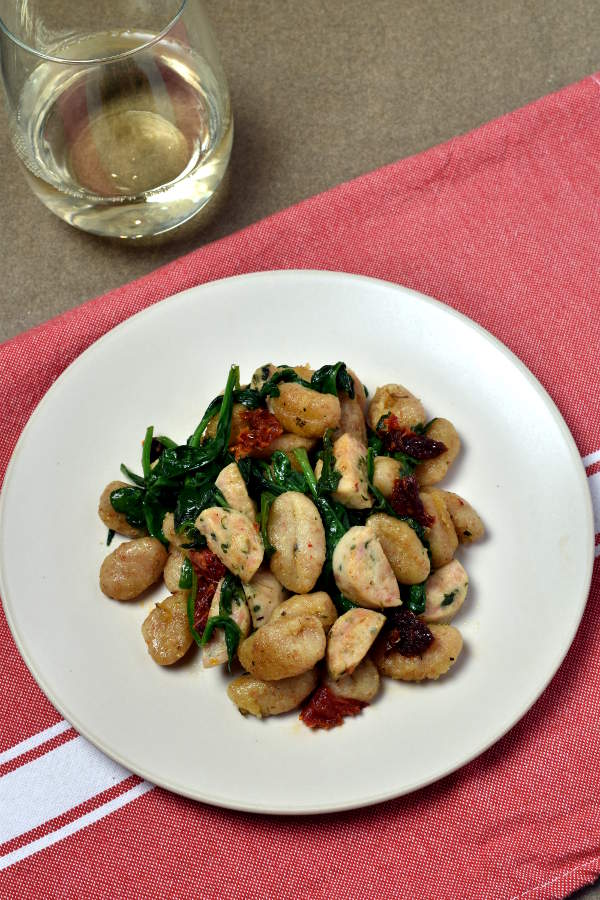