Baked salmon gets a sweet and crunchy topping with pecans and maple syrup. Served with cheesy creamy individual potato gratins and sautéed spinach, this is a meal you won’t soon forget. 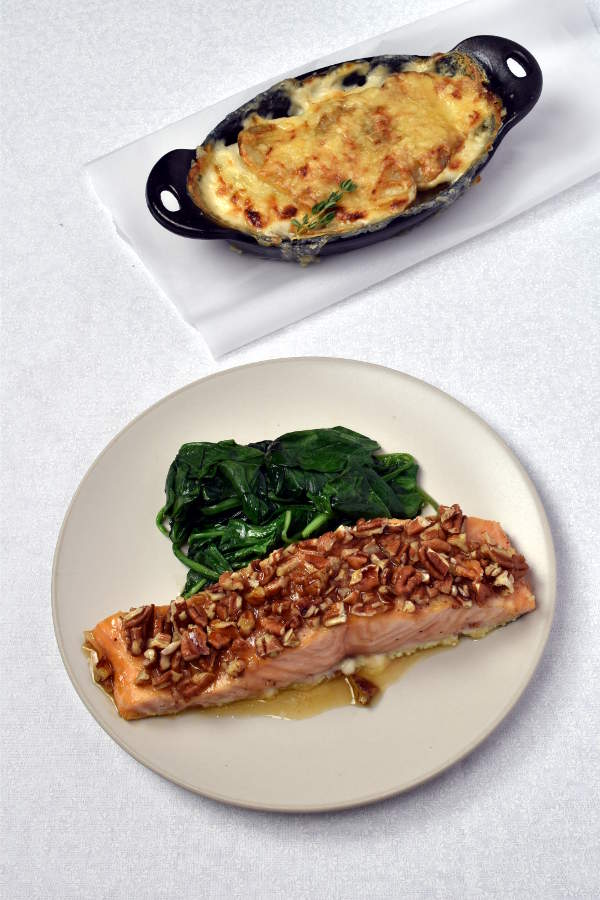 Lately maple has been branded as a fall flavor. Dunkin Donuts and Starbucks both released maple flavored drinks this past fall, and this article from Time Magazine has more on the trend. I do agree maple syrup is great in pumpkin or apple baked goods, with roasted root veggies, and in many other fall dishes. I even used it in my Pumpkin Seed Crusted Salmon with Sweet Potato Mash and Maple Cinnamon Roasted Pumpkin Seeds. But I thought this trend was kind of perplexing because maple syrup is actually a spring food.

The maple sugaring season in New England, when maple trees are tapped and the sap is collected to make maple syrup, generally runs from February to April. A couple years ago, Jonathan and I went to a Mass Audubon event where we got a tour of their small maple sugaring operation, where they use the same tools and methods used by Native Americans and colonial farmers. It was really for kids, but I thought it pretty cool.

Fortunately, maple syrup lasts a long time, so we can enjoy it all year. I like using maple syrup in baked goods, adding it to my oatmeal, and using it for sweet sauces. I have a few ideas for upcoming recipes using maple syrup, like today’s salmon.

This recipe is basically a baked salmon fillet, coated with pecans and maple syrup. It’s relatively simple, but the flavors are so good together. I decided to get a little fancier with my side dish, making individual potato gratins. They bake in less time than if you made one large gratin, and everything looks cuter in individual baking dishes. For the vegetable, I went with ultra-quick sautéed spinach.

Here are some of the main ingredients. Those are two salmon fillets, some shredded gruyere cheese (you can substitute shredded Swiss or even mozzarella if you’d like), two russet potatoes, a half a cup of chopped pecans, and some spinach. 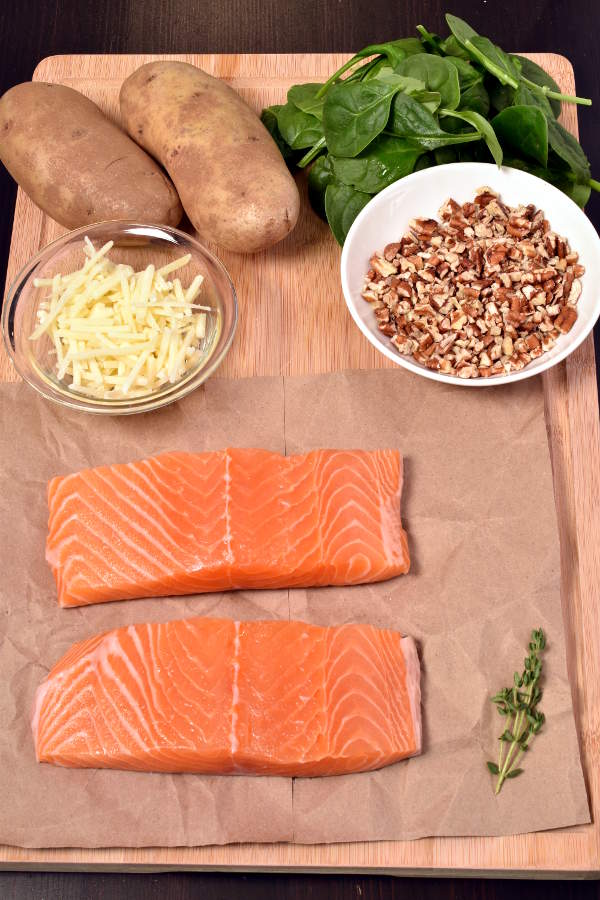 The potatoes for the gratin need to be about 1/8 inch thick. If you cut them thicker, you’ll need a longer baking time. I used the thick slicing attachment for my KitchenAid mixer. The recipe calls for two potatoes because one might not be enough, and you don’t always get perfect slices in the food processor on the first try, but you will have leftover potatoes. You can try starting with just one and see if that makes enough. 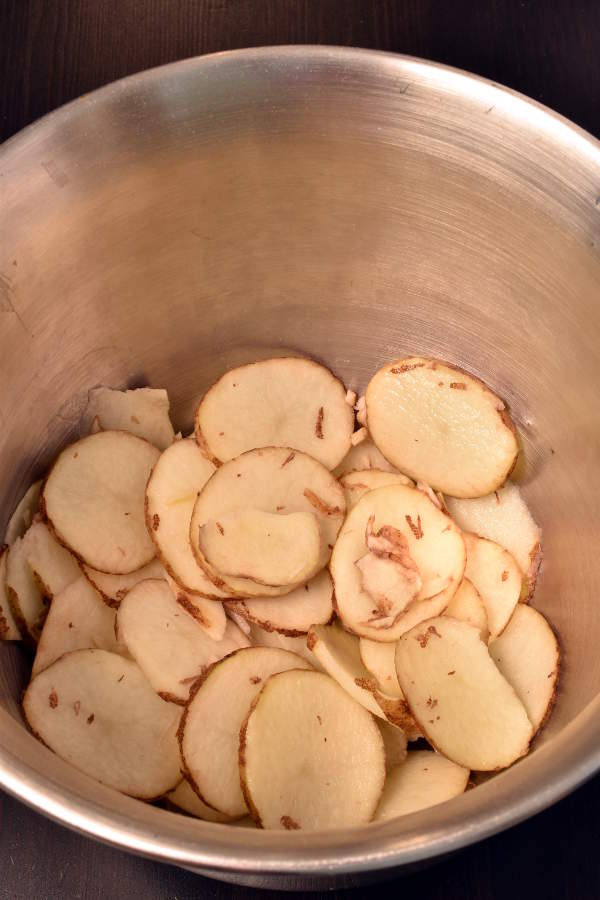 I layered the potatoes into the baking dishes. (Later I decided to add some parchment paper to the sheet pan, which was a good idea because some of the cream and cheese bubbled over.) 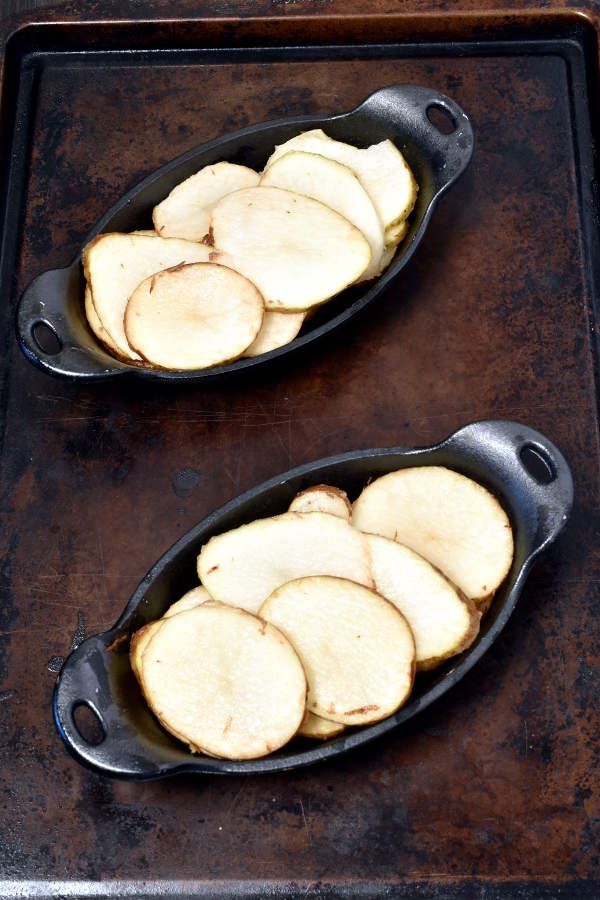 I wanted to eat them right away when they came out of the oven. That little bit of crispy cheese on the sides is Jonathan’s favorite. 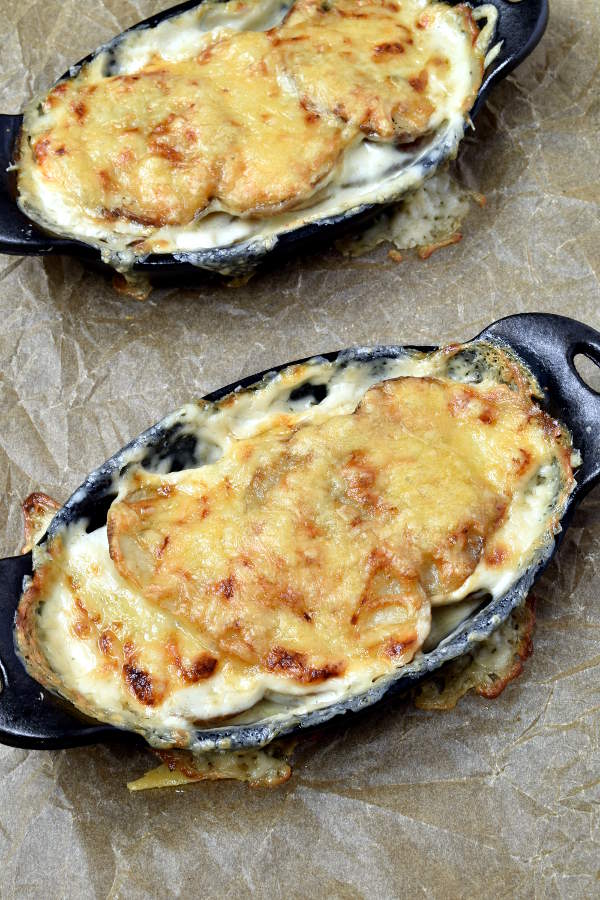 I put the salmon in the oven a little before the potatoes were done. It finished baking during the time the gratins need to rest. You can see some of the maple syrup dripped off the salmon. I spooned it out of the baking dish and drizzled it over the salmon just before serving. 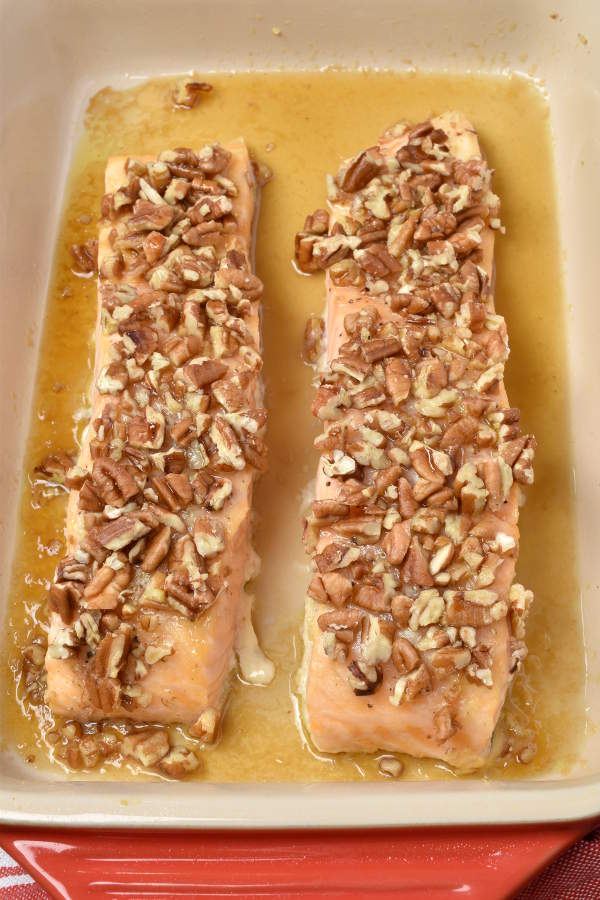 While I recommend this combo, obviously feel free to make the salmon by itself or to pair the potato gratins with another main dish. They’re both delicious in their own right! 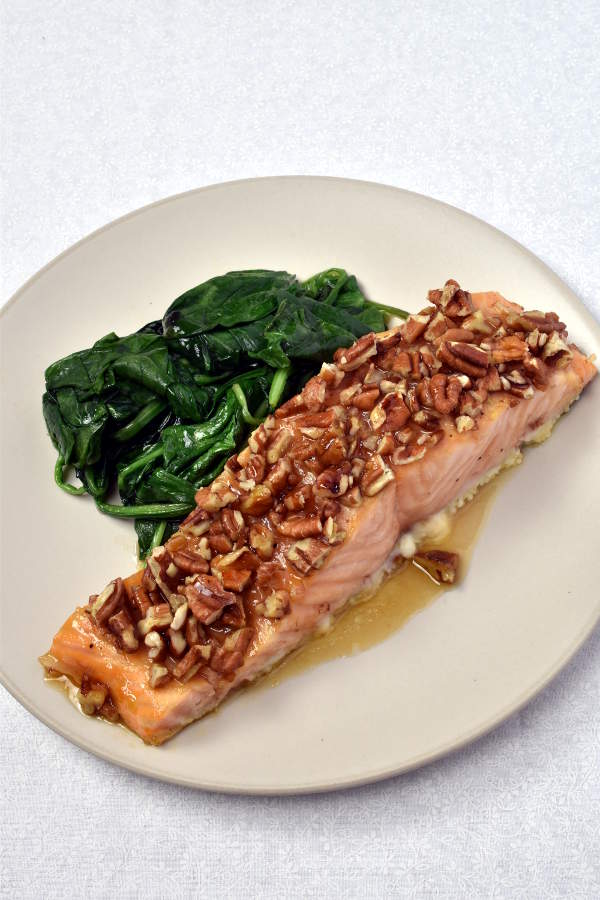 *1 potato may be enough for the gratins, but have 2 on hand in case you need more.