Panettone French Toast is the best way to enjoy that sweet Italian panettone bread you have left over from Christmas, or to get in the holiday spirit as soon as panettone hit stores in November. This scrumptious international fusion breakfast highlights the sweet flavor of panettone with soft rich custard and crisp edges.

Panettone is a sweet Italian yeast bread filled with candied orange peel and raisins and traditionally baked for Christmas and New Year’s. Modern versions are sometimes made with chocolate, pistachios, limoncello, or other flavor variations. Smithsonian Magazine has an interesting history of this pastry here. This soft fluffy bread is delicious on its own for breakfast or an anytime snack, but it’s also the perfect texture and flavor for French toast.

When I saw panettone show up at Trader Joe’s a couple weeks ago, I put one in my cart immediately. I knew right away it was destined for French toast. While it may be a relatively simple recipe, I had to share this one on the blog. Panettone French toast is too good not to share. It’s the perfect weekend brunch or breakfast anytime between Thanksgiving and New Year’s–just make this one before you start the diet in January!

Here are the main ingredients. That’s one large panettone, weighing about 1 pound, 10 ounces, whole eggs, 2% milk, vanilla, sugar, and cinnamon. If you are using a smaller or half panettone, just scale down the other ingredients accordingly. The only ingredient not shown is salted butter that I used to fry the French toast slices. 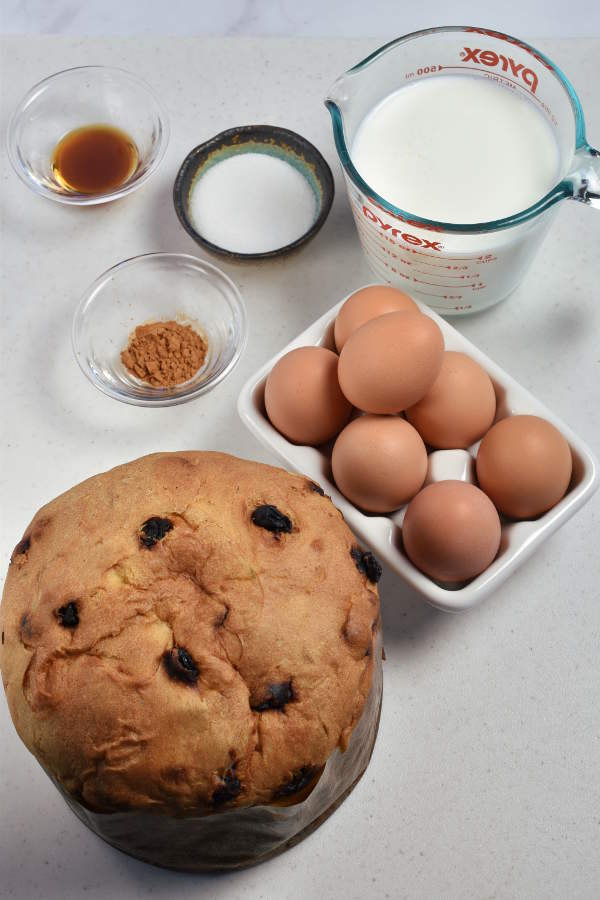 How to Make Panettone French Toast

First, cut your panettone into 10 slices. With two slices per person, this will serve five. In this photo you can see how I cut off the end from each side, then cut it down the middle and cut four slices from each half. 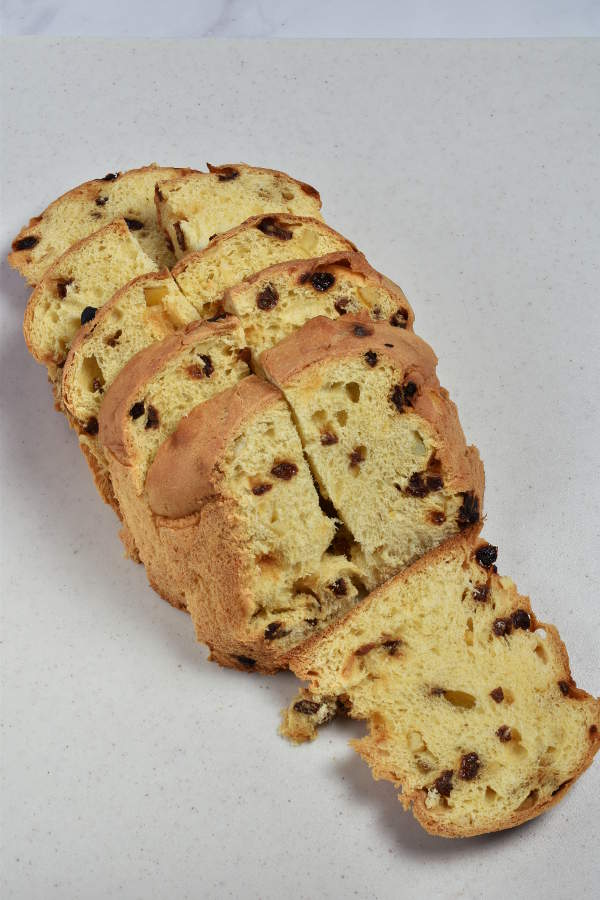 Next, whisk together the custard ingredients. 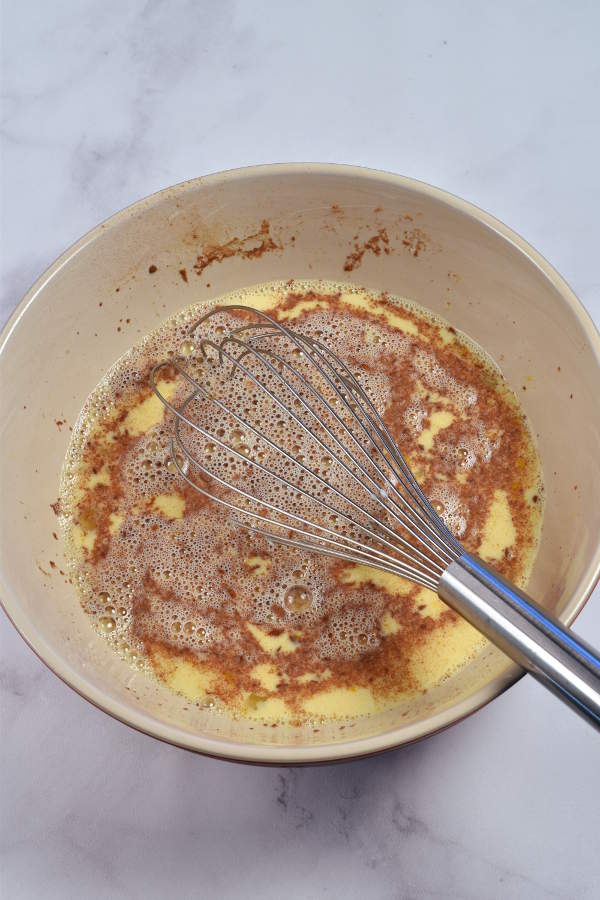 Dip the panettone slices in the custard, then cook in butter for a few minutes on each side. I was able to fit four slices into my skillet, so I cooked all the panettone in three batches. 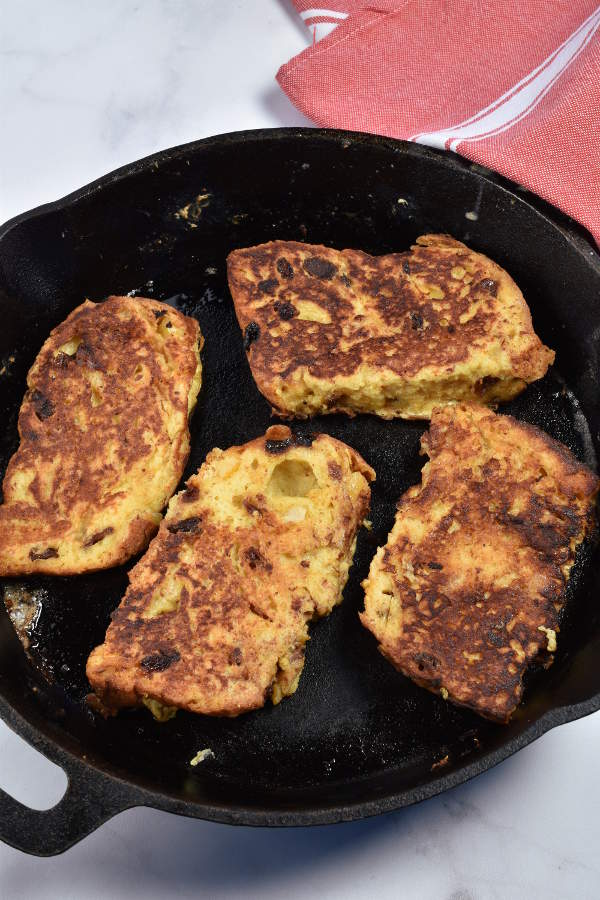 Unless you are just cooking a few slices, I recommend transferring the cooked French toast to the oven to keep warm until ready to serve.

I’m a maple syrup girl all the way. So even though this panettone French toast is very sweet as-is, I can’t help but drizzle some maple syrup over the top. I found barely-sweetened whipped cream was also a great topping to cut the sweetness somewhat. Traditional French toast toppings like butter and powdered sugar are also good on this.

For fresh fruit, I like to serve with orange slices or red grapes to highlight the candied orange peel and raisins in the bread. (I should probably tell you I don’t like raisins. But the panettone is so good, I don’t even feel the need to pick them out.) To add some color to your plate, you can also never go wrong with strawberries, blueberries, or raspberries. 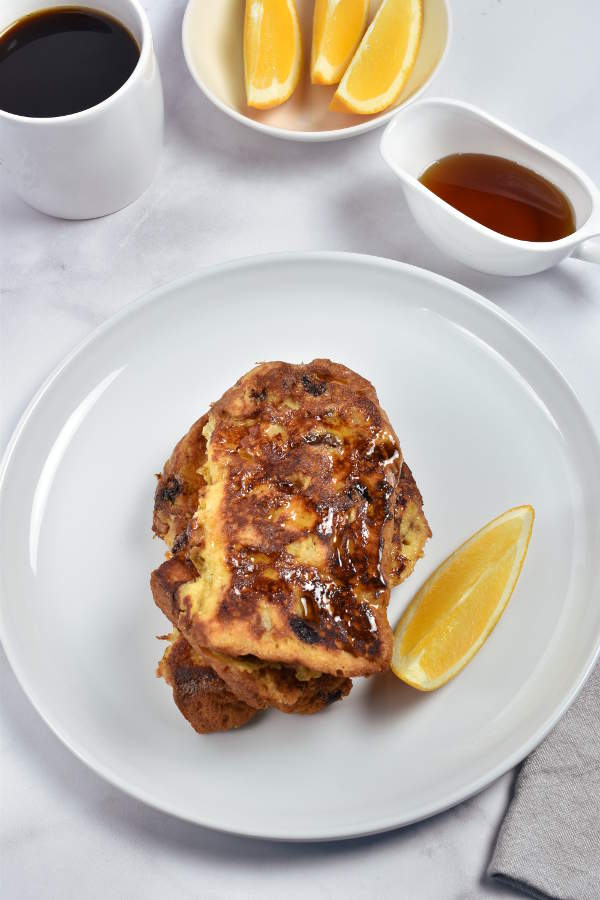 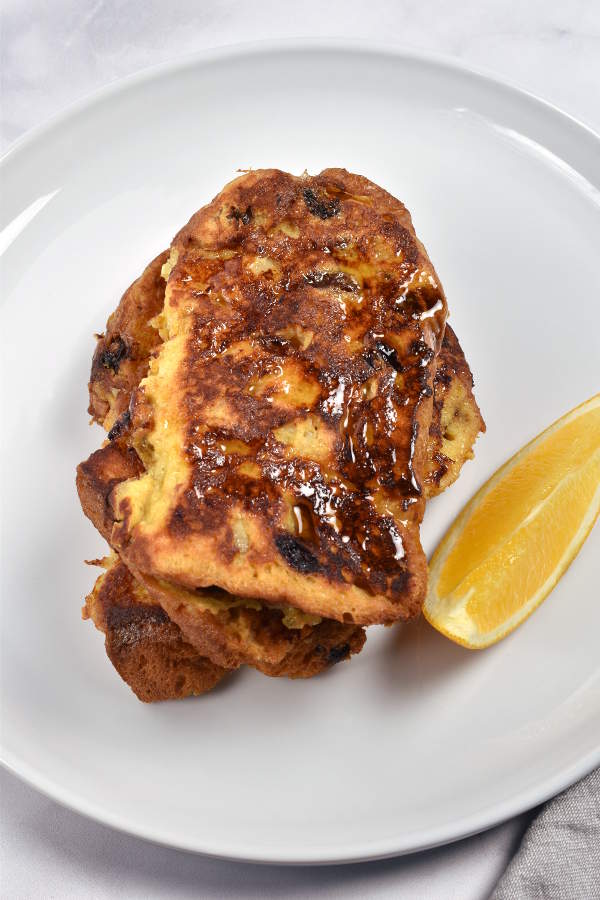 Panettone French Toast is the best way to enjoy that sweet Italian panettone bread you have left over from Christmas, or to get in the holiday spirit as soon as panettone hit stores in November. This scrumptious international fusion breakfast highlights the sweet flavor of panettone with soft rich custard and crisp edges.

Some topping ideas: butter, maple syrup, whipped cream, powdered sugar, fresh fruit. Since the panettone has candied orange peel and raisins in the bread, I like to garnish with orange slices or grapes. Strawberries, blueberries, and raspberries are good too.

Calories are based on Trader Joe’s brand Panettone and don’t include toppings (sorry!)