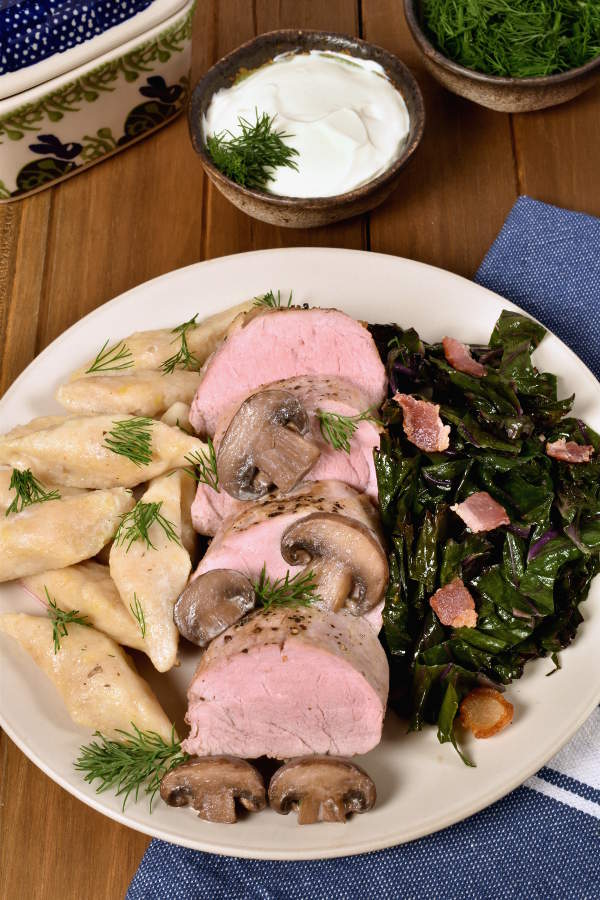 I’ve written before about how I’ve been fortunate to be able to travel, and how I enjoy creating dishes I’ve tasted on my trips. Example number one: this Lomo Saltado from Peru.

Today’s dish is based on a lunch I ate in Krakow, Poland, in August, 2016. (Yes, I have a very good memory for food.) I was on a group tour. In the morning, we visited the Wieliczka Salt Mine. Afterwards, our tour guide dropped us off in the Old Town Square. We were meeting our local guide there at 3pm for a walking tour, but we had free time until then. The group I was hanging out with on the tour wanted to eat at this Italian restaurant right on the main square. So, I already ate Italian food like three times on this two-week trip to stay with the group and be social, but I really wanted to eat Polish food. So I decided to be anti-social and just go off on my own and eat lunch at a Polish restaurant by myself. I picked this place that was only a block away, still in a very touristy area. It had an English menu, but everyone at the tables around me was speaking Polish. The waiter started talking to me in Polish and then told me I looked like a local, which happened quite a few times during this trip. I do have some ancestors from that part of the world, but trust me, I don’t dress well enough to pass as European.

It was actually a Georgian Polish restaurant, and the bread they served reminded me of Uzbek bread I’ve had in New York. I ordered from the Polish side of the menu, and I got a dish described as pork with wild mushroom sauce with beets and potato dumplings. Here is a photo I took: 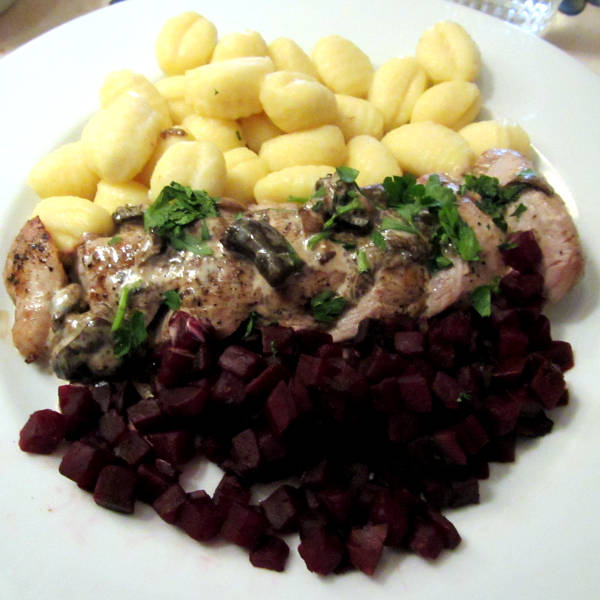 After lunch, I did some souvenir shopping in the Cloth Hall. There is a legend about a dragon who lived in a cave at the bottom of Wawel Hill in Krakow. There is even a “dragon bone” in front of Wawel Cathedral. Jonathan’s Chinese zodiac sign is the dragon, and we both like stories with dragons. They sell these plush dragons all over Krakow, and I had to buy one for him. I know it’s not the most authentic souvenir. What does it say about me that after this whole story about having to eat Polish food in Poland, I had to have this made-in-China dragon? 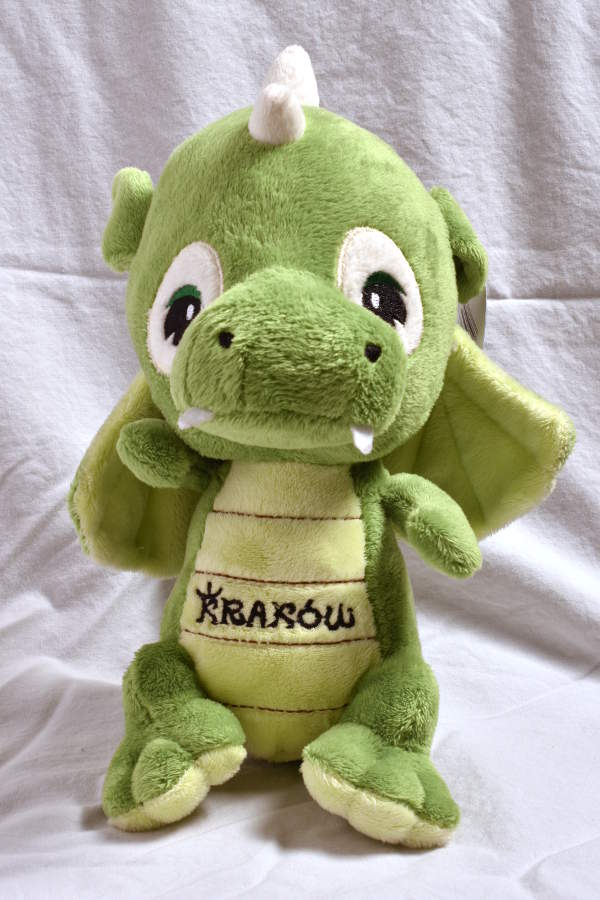 But how cute is he? I got him as a gift for Jonathan, who named him Baby Basil.

Now that I’ve indulged myself in telling that story, back to the recipe.

Here are the some of the main ingredients: 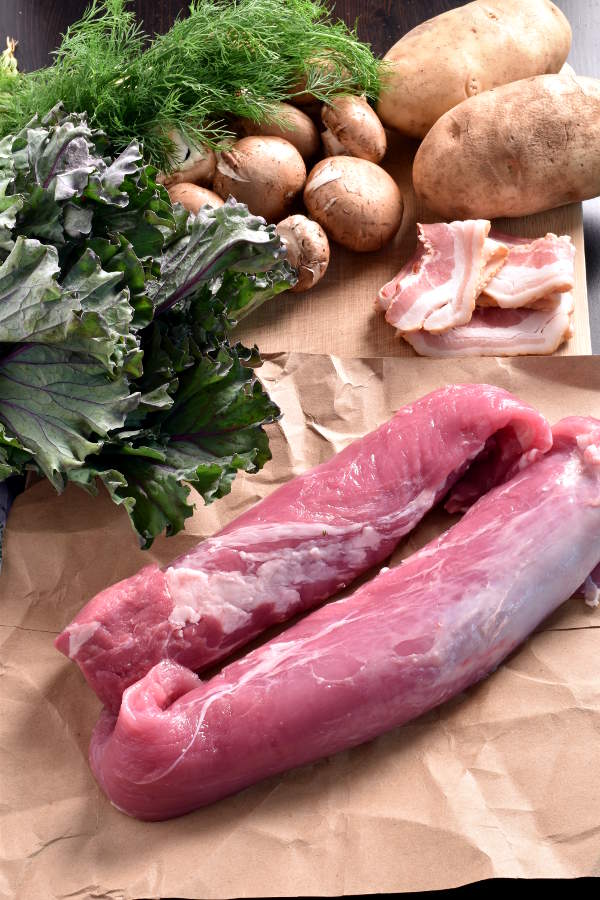 We’ve got two pork tenderloins, some bacon, some Russian red kale, some baby portabella (aka cremini) mushrooms, some russet potatoes, and some dill.

I ate a lot of fatty meat in Eastern Europe, so I was really happy to eat a leaner cut of meat. The pork tenderloin is very quick and easy to cook. I browned it in some bacon fat and then finished it in the oven. If you take care not to overcook it, it stays juicy and tender.

The mushroom sauce, which is optional if you’re not a mushroom fan, is also pretty easy. Sauté some mushrooms in butter, add broth, thicken with flour, finish with sour cream. Smother your pork tenderloin with creamy tasty mushrooms.

Take a look at this mushroom sauce: 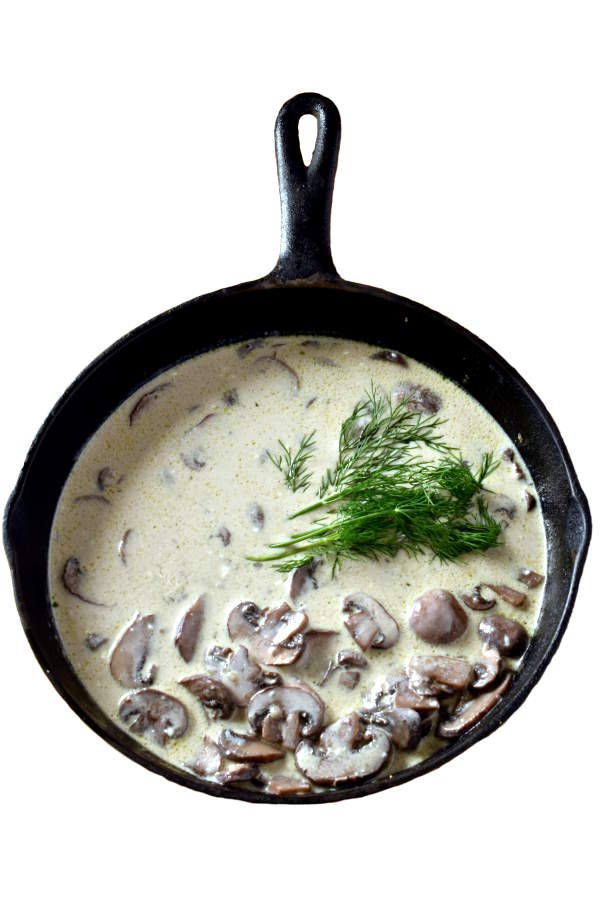 Now as for my vegetable choice, beets are very popular in Polish cooking, and I wouldn’t say I dislike them. But I do prefer green vegetables. You could, of course, make this with any vegetable you like. If you don’t want to dirty another pot or pan, I think a simple green salad would fit the bill. I was in the mood for heartier greens. Then I found this interesting article saying that kale has been used in traditional Polish cuisine since the 17th century, so I went with it. And that bacon I cooked to use the bacon fat to brown the pork tenderloin? I threw those bacon pieces in with the kale because, why not?

Let’s talk about the potato dumplings, which I included as a separate portion of the recipe. Polish potato dumplings, called kopytka, are very similar to Italian gnocchi. After comparing the ingredients, the only real difference I can find between the two is the shape. Kopytka means “little hooves” in Polish, and I can kind of see it…

If you don’t want to make the dumplings, you can buy gnocchi from the supermarket and use that. I’m not going to be a snob and say you have to make everything from scratch and grow the wheat in your backyard and grind the flour yourself. I mean, even the potato dumplings in that photo from the restaurant look suspiciously machine-made.

However, if you have the time, I think you’ll find it worth it to make the dumplings. Once my ingredients were prepped, I was able to get this whole dinner together in the 1 hour, 20 minutes time listed on the recipe, but there is a lot going on here. You have the pork, the dumplings, the mushroom sauce, and the kale. If I was having company over or just short on time, I personally would want to make the dumplings ahead of time to make everything easier for myself. So I had to research a make-ahead option.

I tried making the dumplings the day before, leaving them in the fridge on a sheet pan uncooked, and then cooking them the next day. The problem is, when left in the fridge overnight, something oxidizes and the dumplings turned black. (It looks like the fresh gnocchi they sell in the refrigerated sections at supermarkets has ascorbic acid added to prevent this from happening.) So you cannot keep these dumplings in the fridge before cooking.

But, I do have a simple solution for you. Boil the dumplings, as specified in the recipe. Then toss with melted butter and refrigerate. You can reheat them in the microwave for up to a week, and, I swear, they taste exactly the same as when they were freshly boiled. So if you want to make the dumplings ahead of time, just cook them all the way.

By the way, another way to enjoy kopytka is fried. After they’re boiled, you can pan fry them in butter, maybe with some fried onions, and top with sour cream. If you have leftover dumplings, you should try it. I think it’s good with eggs for a weekend breakfast.

If you do make the dumplings, here are some photos I took that may help. 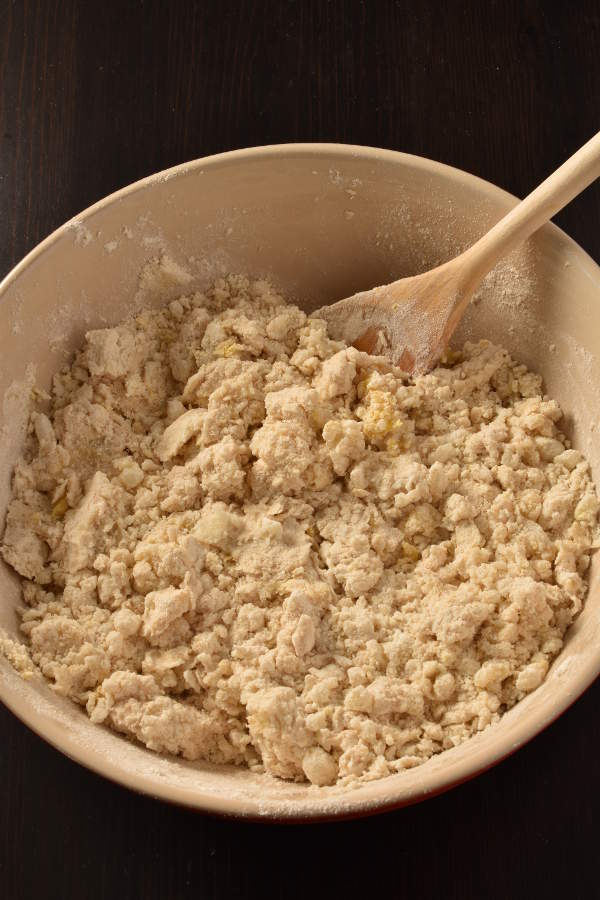 This is not all of my dough, but to give you an idea what the different steps look like. You’ll break off pieces of dough, roll them out into long strands, and then cut them on a diagonal to make the “little hoof” shape.

Here they are ready to be cooked: 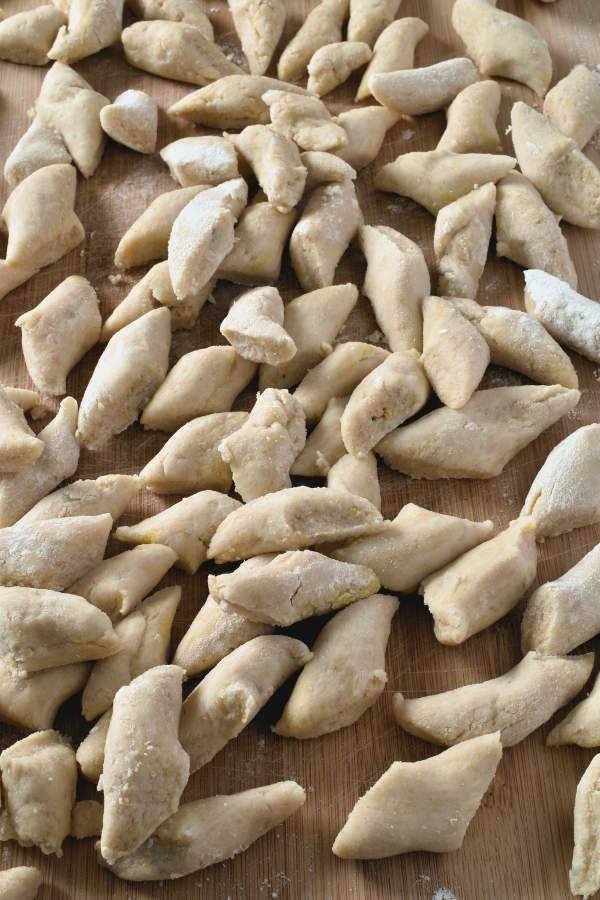 I hope you’ll give these dumplings a try. They go great with the mushroom sauce! 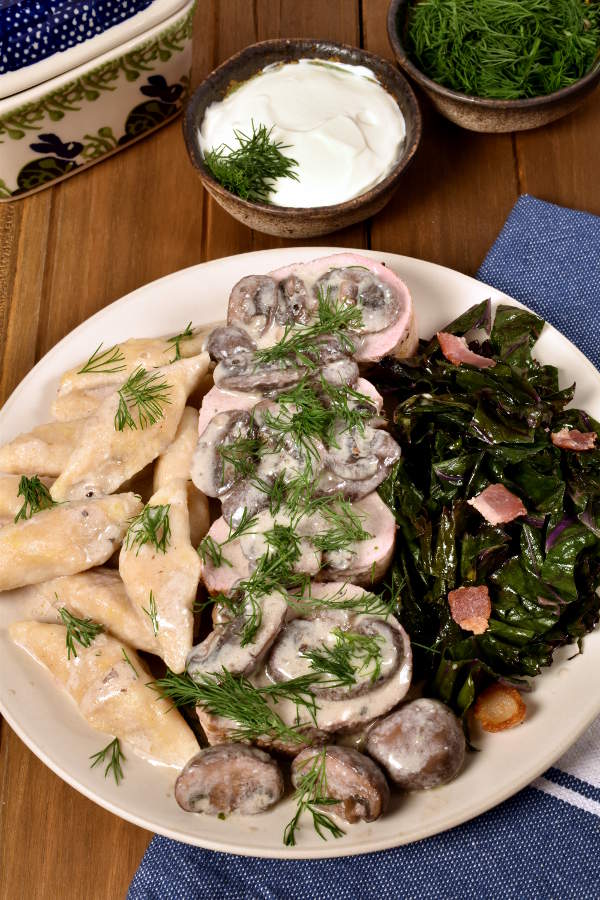 The potato dumplings can be made ahead fully cooked and reheated in the microwave. (Do not refrigerate raw dumplings before cooking.)