Juicy duck, crispy skin, and a sweet cherry sauce to balance it out. Fry potatoes with the extra duck fat! 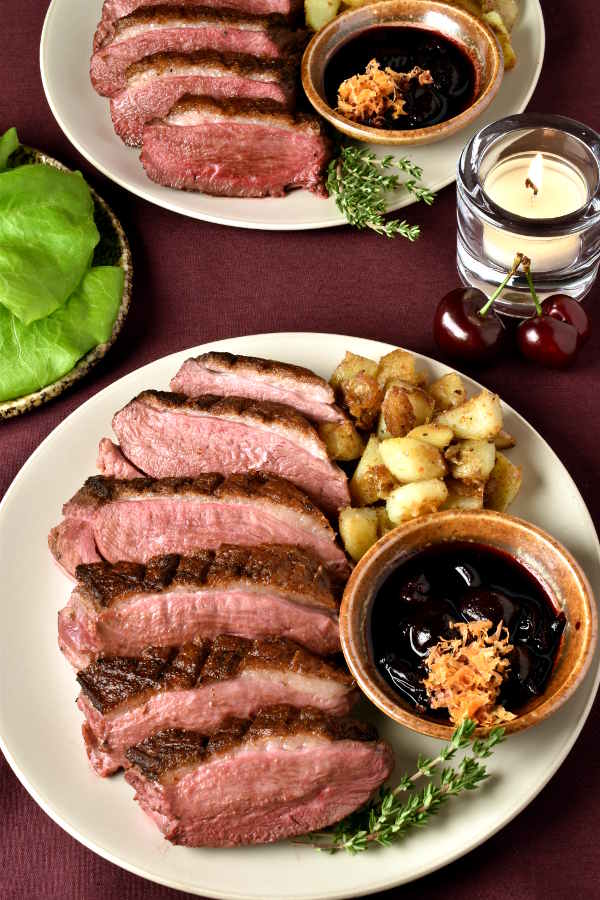 It’s my first blog post. I’ve casually joked about starting a food blog for several years. I follow so many, and it was always in the back of my mind that I’d one day start my own. Like, I would make up a recipe and tell people “I have to post this on my food blog,” and they’d ask me “Oh, what’s your blog?” and I’d say “Just kidding, I don’t have one.” I never really thought it would happen.

Until about a year ago, when I started thinking, why not? I love reading food blogs, and I always think about what I would post if I had my own. Why not actually do it? I did some research. I bought a new camera. Jonathan bought me a fancy lens.

The past few months, I’ve been practicing my food styling and photography. It’s absolutely horrifying when I look back at a picture I took in February and remember that, at the time, I thought it was good. I have improved so much in just a few months. I can only hope I’ll one day look back at this first post and be embarrassed at how bad these pictures are because I’ll have improved so much more.

Well, a girl can dream.

The question now is, how do I know I’m ready to share the photos with the world? The thing about creative work is, if you wait until it’s perfect, you’ll never share it. I have to start somewhere, and I’ve, perhaps foolishly, decided I’m ready. I want to keep learning and improving, and I’m open to feedback on the recipes, photography tips, suggestions, and comments. You can also read more about the blog here.

Ok, let’s get to what you really came here for: the food.

The hardest part of this recipe will be finding the duck breast. You might have to make a trip to a different supermarket from where you normally shop or order it online. But when you want an extra special dinner, it’s worth the effort.

There are two different types of duck you’re likely to see for sale. Pekin ducks, also called Long Island Pekin, American Pekin, and White Pekin, are smaller. If you buy “boneless duck breast” in a supermarket and the label doesn’t specifically say what kind of duck it is, this is likely what you’re getting. The first time I made this recipe, I bought Pekin. The breast pieces were about six ounces each, and I needed two to serve one person. If you substitute Pekin breasts in this recipe, the cook time will also be shorter considering the smaller size.

You’ll also see Moulard duck for sale. The breasts are called magret in French and sometimes sold under that name. Moulard ducks are crosses between Pekin and Muscovy ducks. These ducks are bred for their livers to be used in foie gras.  Each breast piece will be around 14 ounces to one pound. The meat has a stronger flavor than Pekin. Eating a magret is like eating a steak.

That’s right. Duck breast is considered a red meat, and like steak, many people prefer to eat it medium-rare as opposed to well done. The USDA is not one of those people. They recommend cooking duck to an internal temperature of 165oF, same as chicken. (It is possible the meat will still be slightly pink at this temperature.) Personally I prefer duck cooked to medium. Well done duck breast will be dry and chewy, but certainly still edible if that’s a concern for you.

Here’s my cooked-to-medium magret. You can also see the crisscross pattern used to score the skin. 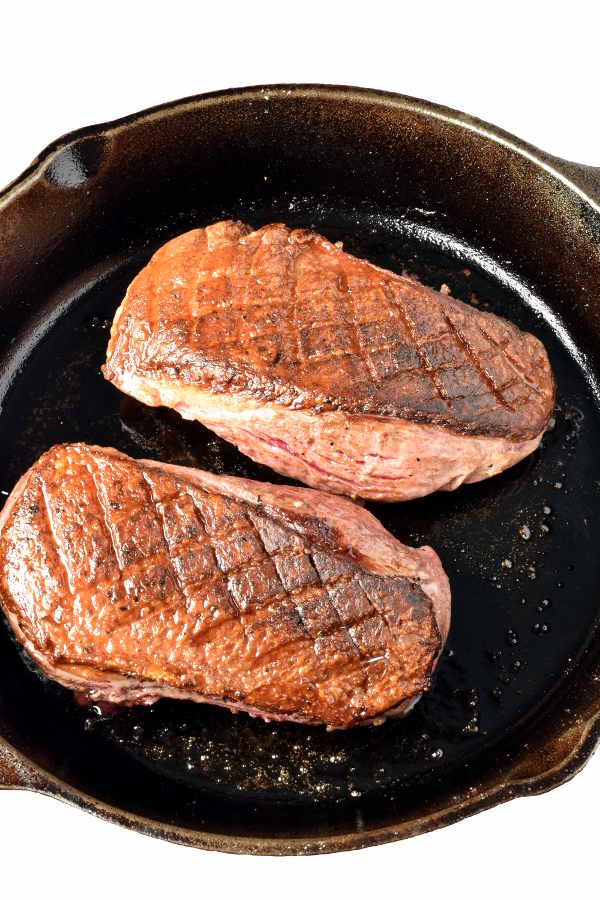 A seared magret is delicious on its own. But I think the crispy fatty skin and bold flavor of the meat pairs well with a sweet, fruity sauce. The cherry sauce takes just a few minutes to make and adds that little extra special touch. For a side, I made use of the rendered fat to fry up some potatoes while the duck was cooking. 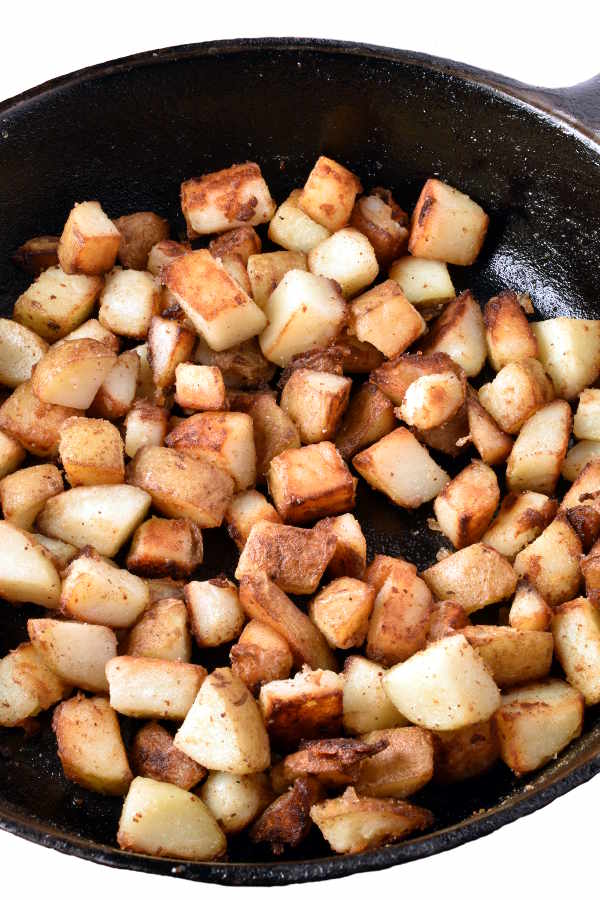 When you’re done making this recipe, you’ll have some extra duck fat leftover. Save this. You can use it to make more fried potatoes, make duck confit, or really to replace any other fat in cooking. I read the French even use it in baking. Or you could put it in a baggie in the freezer for later use and then throw it out six months later when you are cleaning out your freezer. 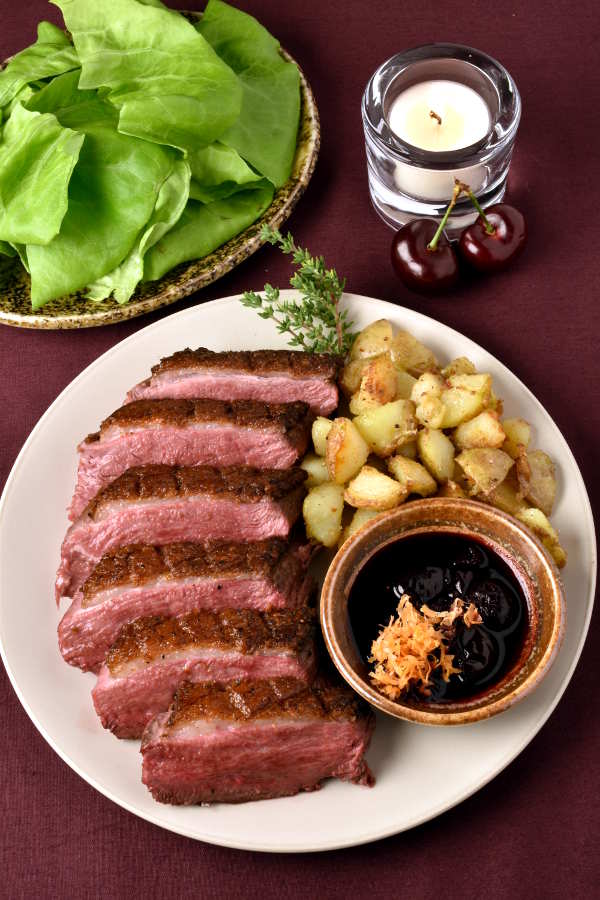