Duck a L’Orange or canard a l’orange is a classic French dish of roast duck served with an orange sauce. This variation, using a pan-seared Moulard duck breast, takes less than an hour to cook. The sweet orange sauce, flavored with orange liqueur and maple syrup, complements the fatty crispy duck. While you’re making the duck and the sauce on the stovetop, roast some potatoes in the oven for an easy hands-off side. 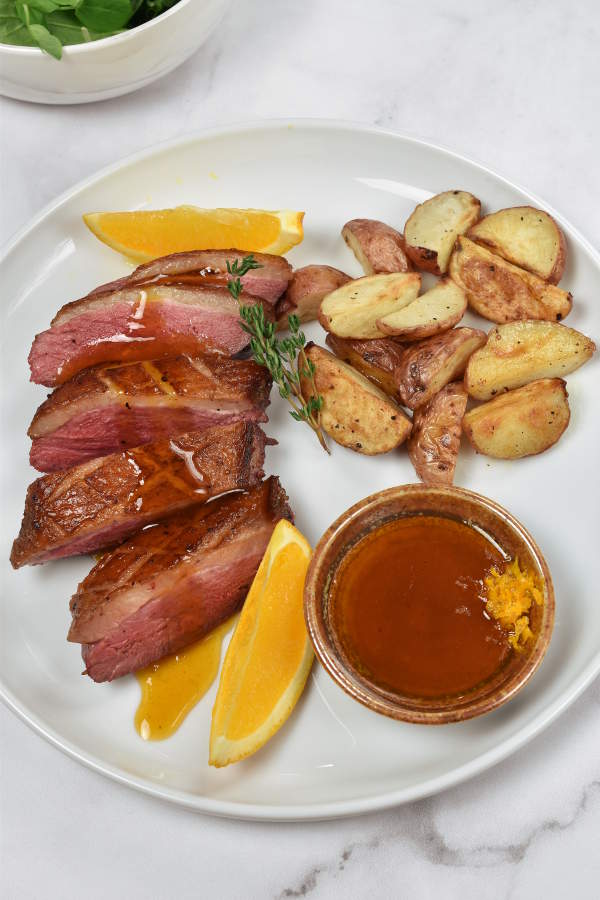 I did it again.

I needed another excuse to make duck. The very first recipe I shared on the blog, Duck Breast with Cherry Sauce and Duck Fat Fried Potatoes, is one of my favorite recipes. I’ve made it for company quite a few times, and I’d consider it one of my most impressive dishes. Most people don’t cook duck at home, and you don’t see it on many restaurant menus. But Moulard duck breasts, called magret in French, are such a treat, and fairly easy to cook. Cook them to medium-rare, like a steak, and you get this crispy fatty skin and tender flavorful meat. It’s so delicious with a fruit sauce.

This is a knock-your-socks-off dish that doesn’t require hours in the kitchen. Perfect for date night or having company over around the holidays. Especially as citrus comes into season in winter, you can get fancy using blood oranges or cara cara oranges to garnish your duck.

So yes, there were several reasons I want to share another duck recipe. I wanted to try an orange sauce, for a faster easier take on duck a l’orange, which traditionally uses a whole duck. I also wanted to show you a few more photos of the recipe in progress than I included with my last duck recipe.

Lastly, I wanted to give you another option for the potatoes. In my Duck Breast with Cherry Sauce recipe, I fried the potatoes in duck fat that was rendered from the skin as the duck was cooking. That is a great way to use up that duck fat and really adds something extra to the potatoes. That recipe, and the recipe I’m sharing today, both serve two. However, when I made duck for company, I tripled the recipe.

I suddenly found myself with three skillets of duck on the stove to monitor and not a lot of extra time to be constantly stirring potatoes. So I decided to roast the potatoes in the oven. Then I had one less thing on the stovetop to worry about. I wanted to share directions for oven roasting the potatoes to give you that option as well, especially if you are making this recipe for a crowd.

Here are the main ingredients. Those are two pieces of Moulard duck breast (called magret in French). If you haven’t cooked duck before, check out this post where I wrote about the different types of duck sold in stores. If you are using smaller duck breasts, you’ll definitely have to cut down the cook time to avoid overcooking. I roasted a pound of baby red potatoes. For the sauce, I used orange juice, chicken broth (not shown), maple syrup, and orange liqueur. 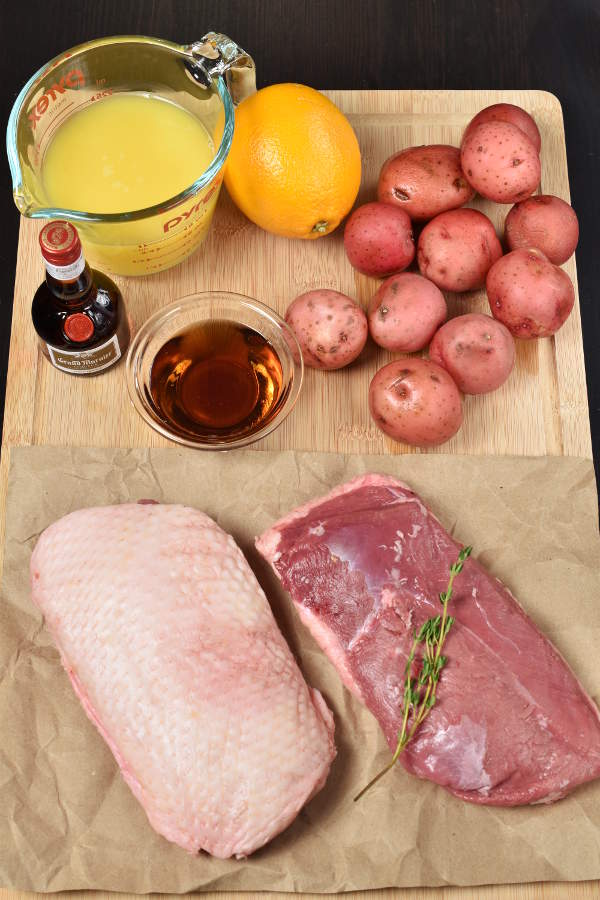 The first step is to get the potatoes into the oven. 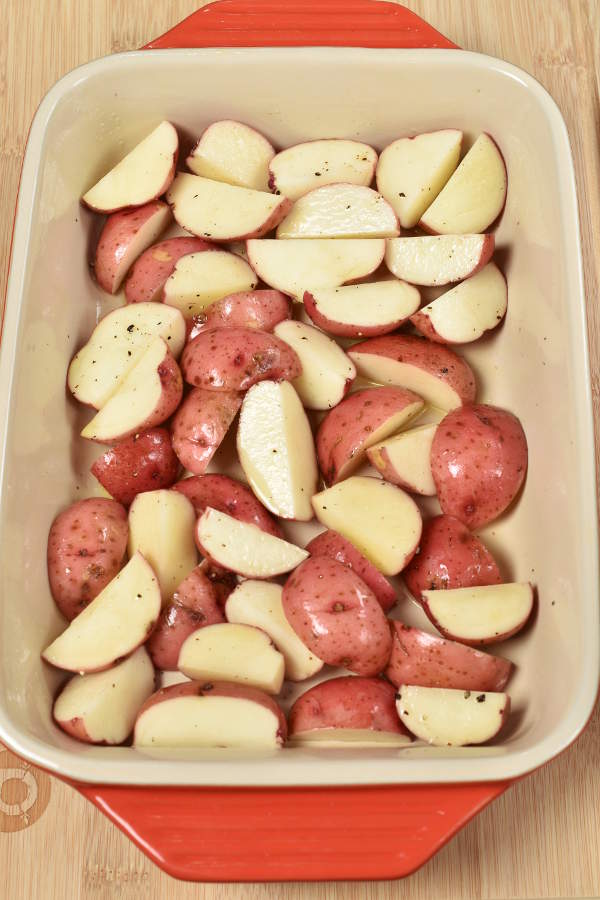 Then I started the orange sauce. Reduce the sauce to about 1/3 cup. 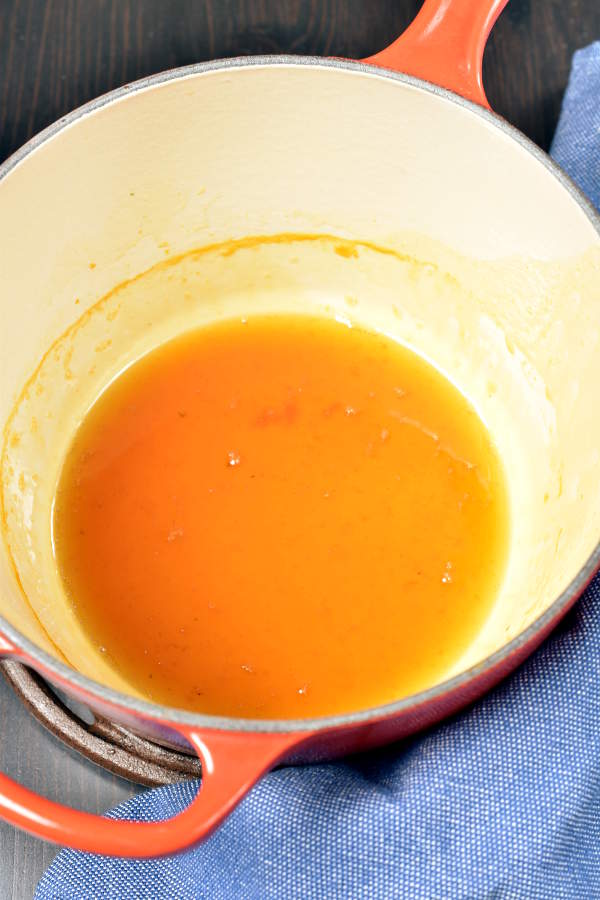 I seasoned the duck with salt and pepper and then scored the skin, which helps the fat render. 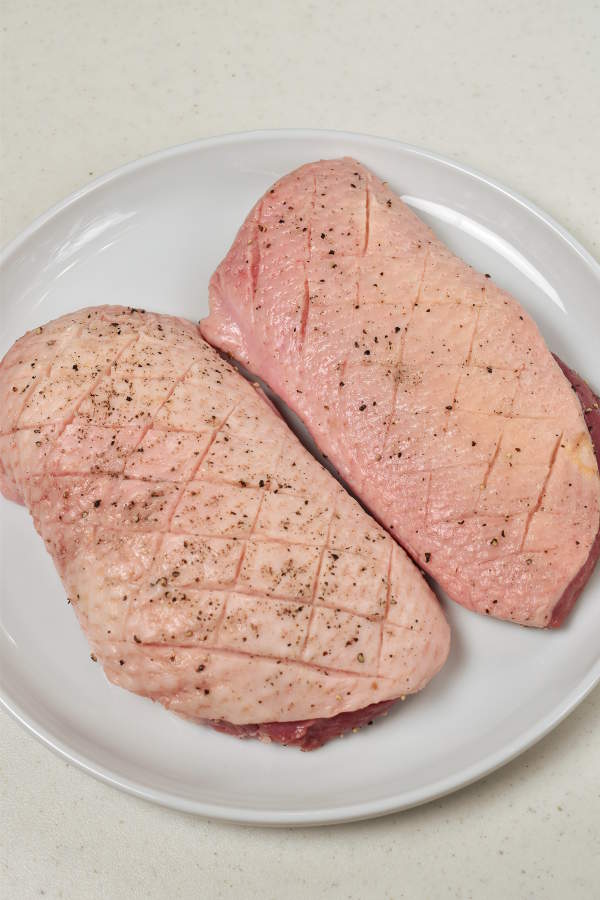 Look at that delicious crispy skin. 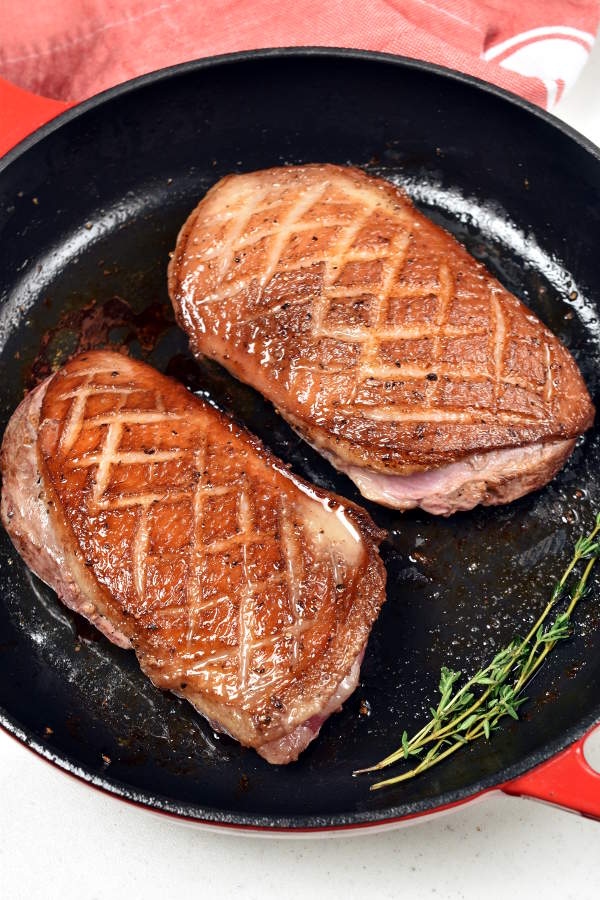 You can save the rendered duck fat in the fridge and use it in place of butter or oil for other recipes. I’ve been melting a spoonful in a skillet and using it to sauté spinach and other greens as a side dish.

Here are the potatoes out of the oven. 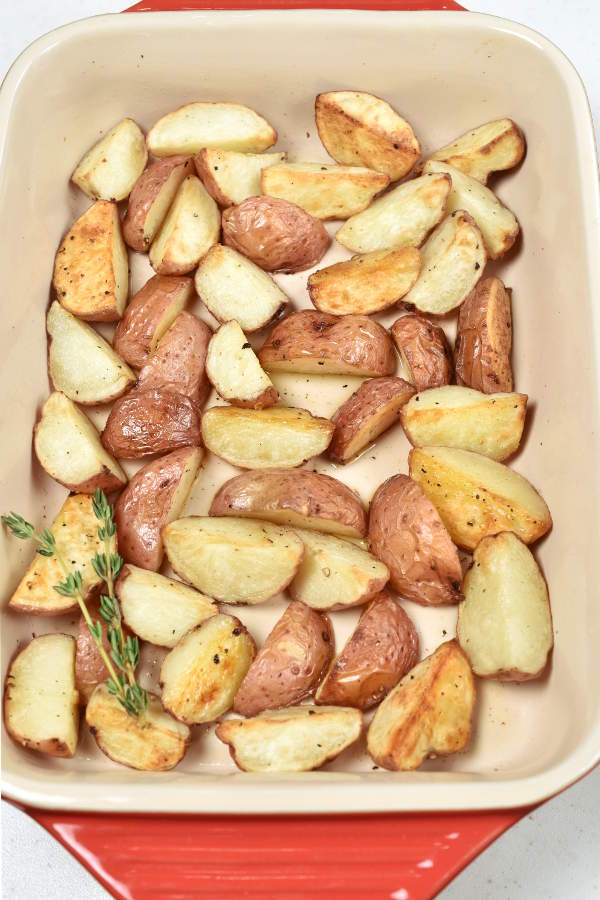 If you haven’t made duck yet, you really have to try it! Don’t be intimidated by making something new. If you have any questions at all, let me know in the comments. 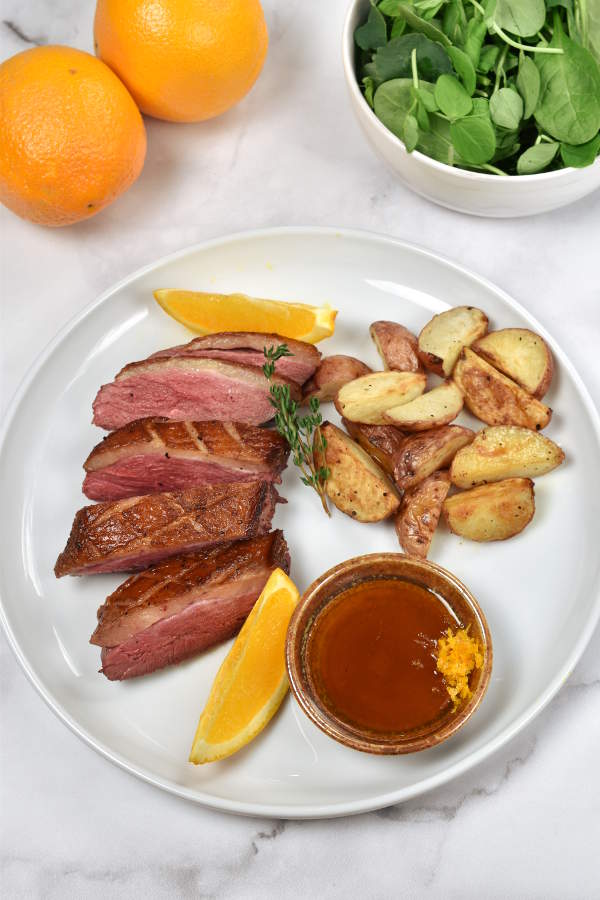 Duck a L’Orange or canard a l’orange is a classic French dish of roast duck served with an orange sauce. This variation, using a pan-seared Moulard duck breast, takes less than an hour to cook. The sweet orange sauce, flavored with orange liqueur and maple syrup, complements the fatty crispy duck. While you’re making the duck and the sauce on the stovetop, roast some potatoes in the oven for an easy hands-off side.
Course Dinner, Main Dish
Cuisine French
Total Time 55 minutes
Servings 2
Calories 1255 kcal
Author Tara Leung