Hungarian braised chicken with smoked paprika in a sour cream sauce is served over homemade dumplings. 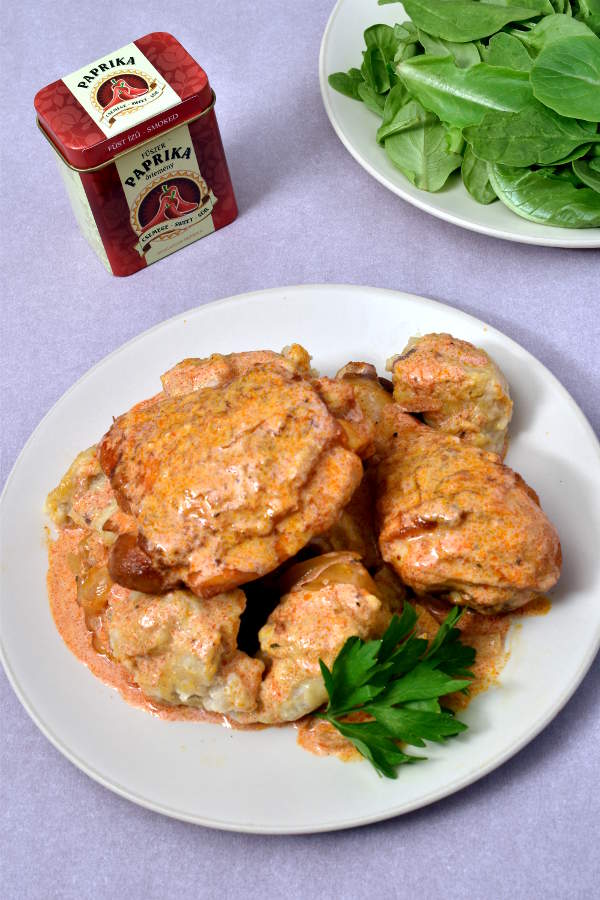 Picture the scene. It’s a summer night in Budapest, the Paris of the East. Smells much better than actual Paris. Temperature in the low 80’s. You’re sitting in the enclosed dining room of a boat, on your Danube dinner cruise. From the windows, you can see the bridges all lit up. There’s no air conditioning in the room, and it’s humid. You feel that Hungarian Bull’s Blood wine warming you up even more, and you’re wiping sweat off your forehead with a dinner napkin. What do you want to eat now?

Well, I was only in Budapest once. That’s what they were serving. Despite it being salad weather, I wasn’t going to pass up eating paprikash in Hungary.

It was delicious, and I don’t regret it.

During desert, a seven layer cake called a Dobos torte, we passed the Parliament building. I ran upstairs to the open part of the boat to take a picture. The way the building was lit up, it looked golden and glowing against the dark night sky. There were birds circling over the roof. The lighting made the birds look gold too. Here’s the picture: 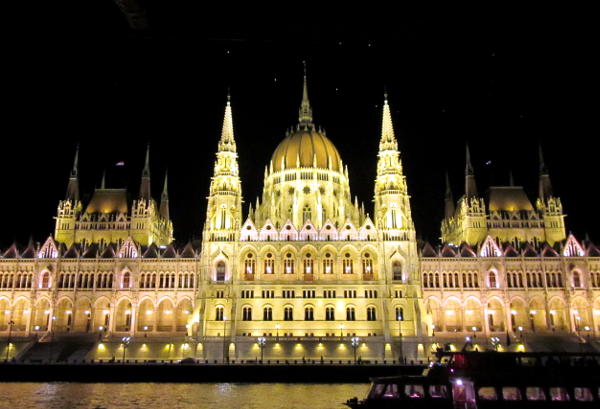 When I went back to the dining area to finish my cake, they had already cleared my plate.

Oh well. You can’t win them all.

Let’s talk about this dish. Is it chicken paprikas or chicken paprikash? My spell check doesn’t like either one. I learned that in Hungarian, the letters sz make a regular s sound, but the letter s by itself makes a sh sound. (I am kind of a nerd about language and was quite fascinated.) So you pronounce the name of the city Budapest like Budapesht. The dish is spelled paprikás in Hungarian, but most spellings I’ve seen in English are paprikash to reflect the pronunciation.

I wanted to make my own chicken paprikash for Jonathan once I came home. It’s really a hearty winter comfort food, so I waited until our first bout of cold weather. I’ve made this several times since then because we both enjoyed it.

Paprika is a spice made out of ground dried peppers. In Hungarian cuisine, I’ve seen four varieties, sweet and spicy and a smoked version of each. We don’t like spicy food, so I used smoked sweet paprika in this recipe. I bought some at the Market Hall in Budapest to take home, but that supply is long gone. I’ve been warned that paprika loses its flavor after just a few months, so you need to buy it often and in small quantities that you can use up before it goes bad. Don’t use that three year old jar from the back of your cabinet.

This chicken paprikash would be good over egg noodles, rice or boiled potatoes. (If you’re carb conscious, I’d suggest cauliflower rice so at least you have something to soak up the sauce.) I think it’s best, however, with homemade dumplings, called nokedli in Hungary, and also known as spätzle. These dumplings are common in many Eastern European cuisines.

I shared a recipe for Polish dumplings called kopytka with this pork tenderloin recipe. Those were potato dumplings, while these are made only with wheat. While the Polish potato dumplings are delicious, these are much easier to make. There are no potatoes to cook and no need to roll out dough. You just mix everything in one bowl and spoon it directly into a pot of boiling water. You can easily make the dumplings during the inactive cooking time for the chicken. I did make my dumplings larger than the traditional nokedli to make things a little easier, and I used half white whole wheat flour.

Here are the main ingredients. You can use any mix of dark or white meat chicken that your household prefers. I used two breasts, four thighs, and two drumsticks. If you use breasts, cut them in half so they don’t take too long to cook. 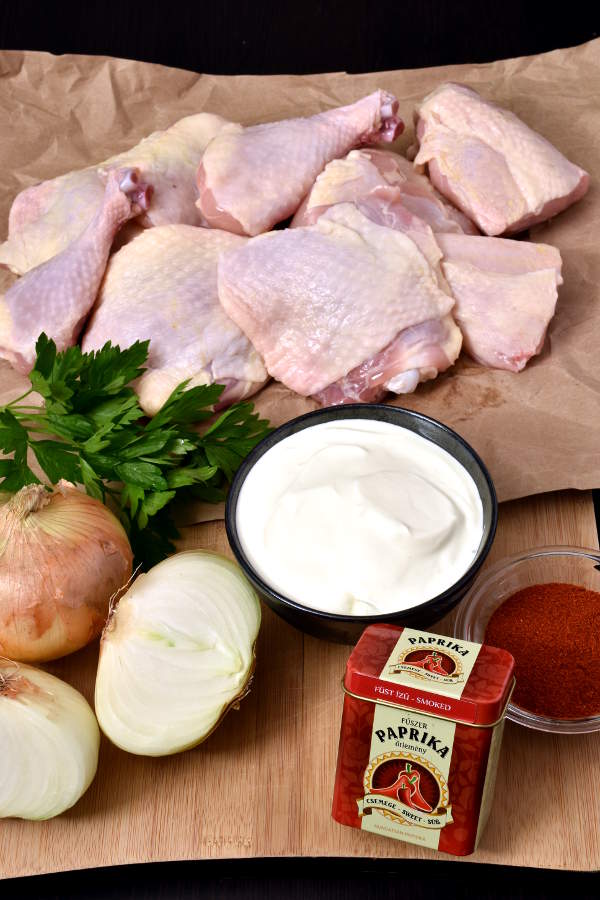 To start off, I browned the chicken in two batches. Here’s half of my chicken: 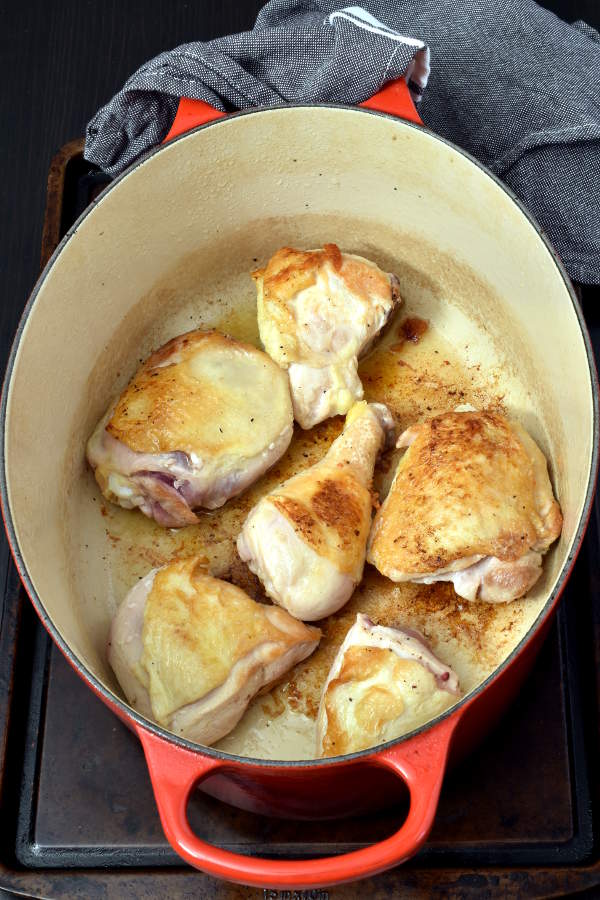 Later on, I made the dumplings while the chicken was cooking. The dumplings are made with flour, white whole wheat flour, salt, eggs, and sour cream. 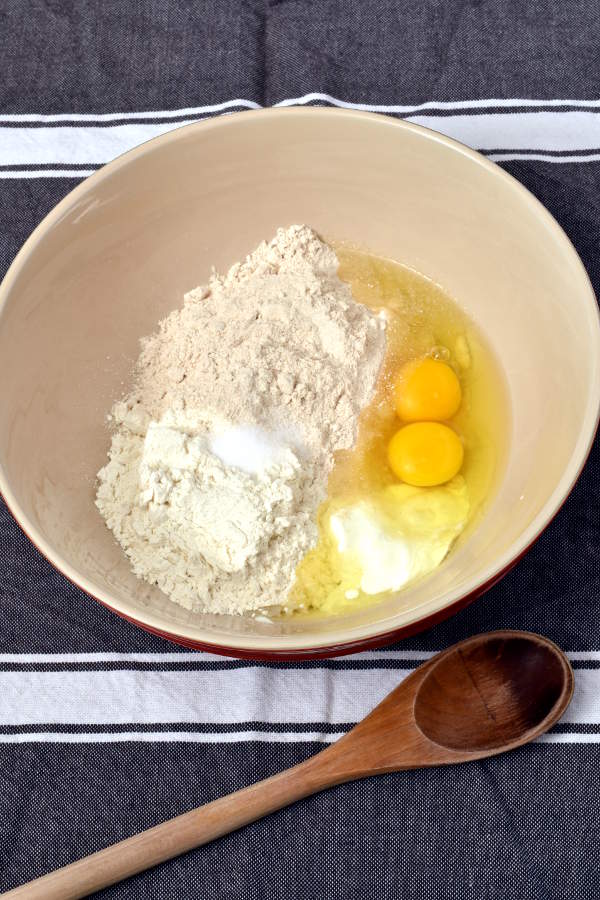 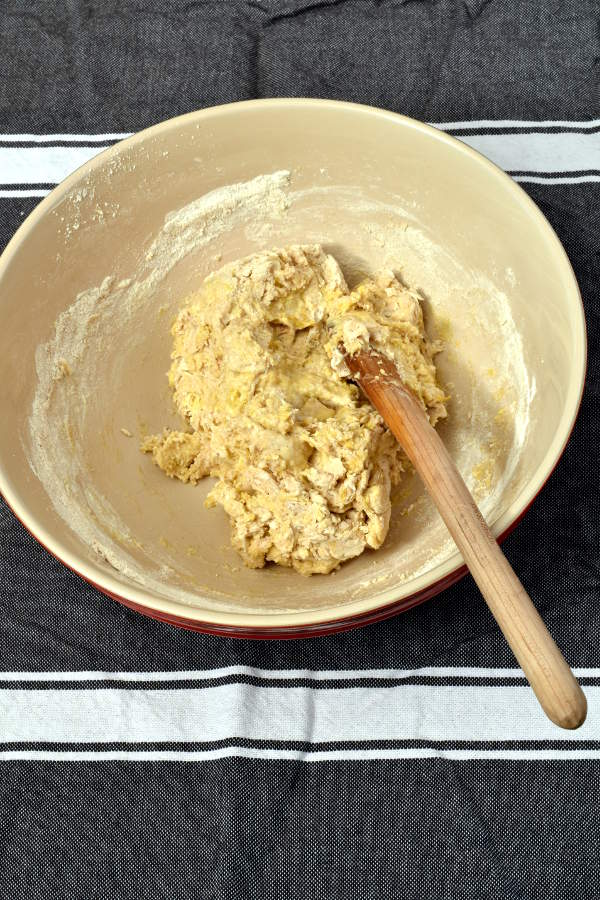 Here are the cooked dumplings. Toss them with some melted butter, and they’re delicious on their own. 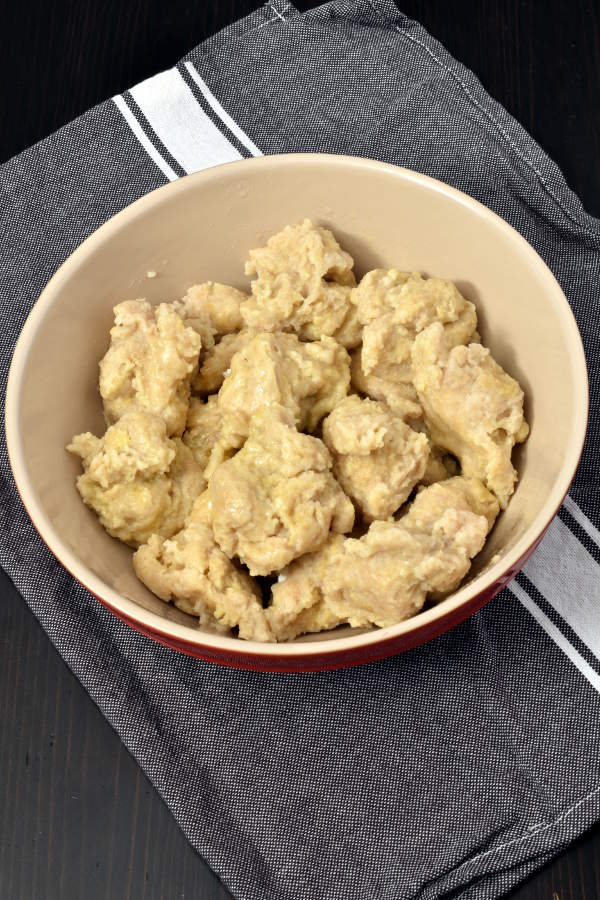 Here’s the chicken that’s finished cooking. You’ll remove the chicken pieces and mix the sour cream into the sauce once it’s cooled down a little. 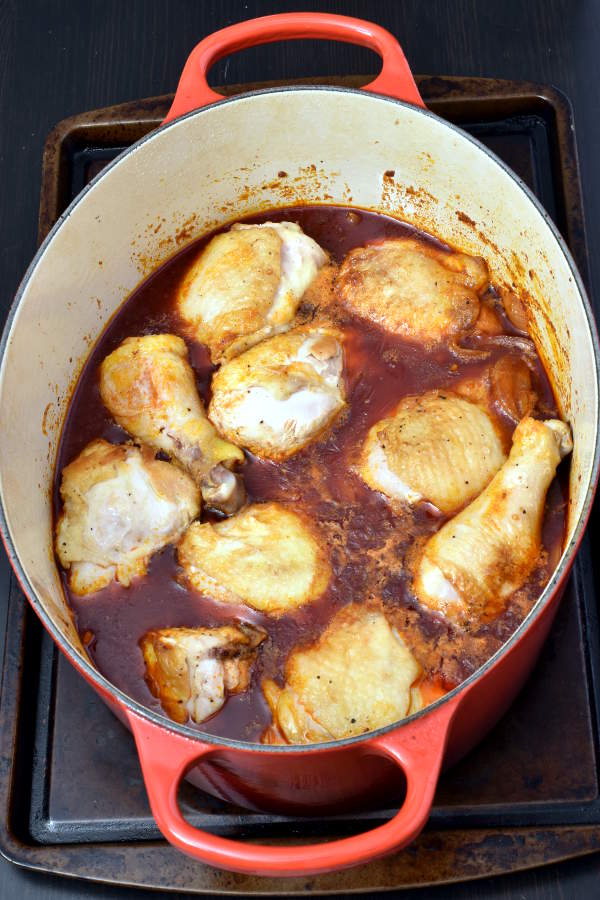 Guys, it’s not easy photographing something smothered in orange sauce. Don’t discriminate against this recipe because of my poor photography skills. My pictures are just not doing it justice. If you like creamy saucy chicken, you must give this one a try! 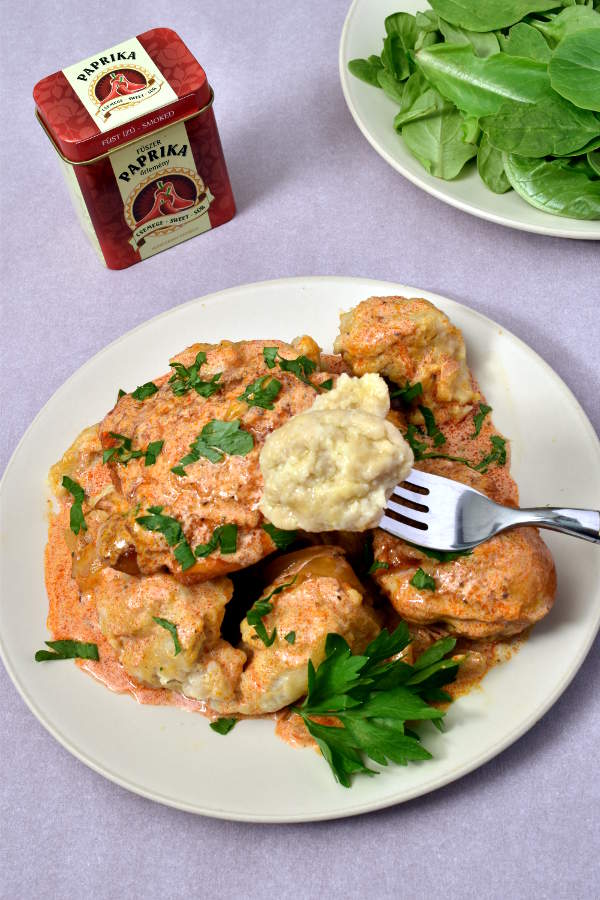